The recent rise in bond yields is threatening to lift the market out of the “extraordinarily low-rate” regime.

Among the reactions in the financial markets immediately following the presidential election was that bond yields went screaming higher. This had strategists scrambling to figure out where the rate rise would stop. We took our shots as well. In late November, we suggested that the 10-Year Treasury Yield (TNX) was hitting extremely key resistance around the 2.30%-2.40% level, including the post-2007 Down trendline (more on this resistance in a moment). But in perhaps a pivotal development, the TNX shot through that level like a knife through warm butter.

On December 19, we took another stab at identifying a potential stalling point for the free-fall in bonds. This time, our rationale stemmed from possible support on the chart of the TLT, the iShares 20+Year T-Bond ETF. This one hit the mark as bonds bottomed immediately and have jumped some 4% (as measured by the TLT) in the 3 weeks since. This rally has taken the TNX back down to test that 2.30%-2.40% level that it broke above back in November.

Despite the TNX’s lack of respect for this area on the way up, we still believe it is an important level to watch and, thus, this is an important test currently. Here’s why.

As many observers may know, bond yields topped in 1981 and have been in a secular decline since. And, in fact, they had been in a very well-defined falling channel for 26 years (in blue on the chart below). In 2007, at the onset of the financial crisis, yields entered a new regime. Spawned by the Fed’s “extraordinarily low-rate” campaign, the secular decline in yields began a steeper descent.  This new channel (shown in red) would lead the TNX to its all-time lows in the 1.30%’s in 2012 and 2016.

The top of this new channel is that post-2007 Down trendline. Thus, recent price action has 10-Year Yields threatening to break out of this post-2007 technical regime. That’s why we consider the level to be so important. 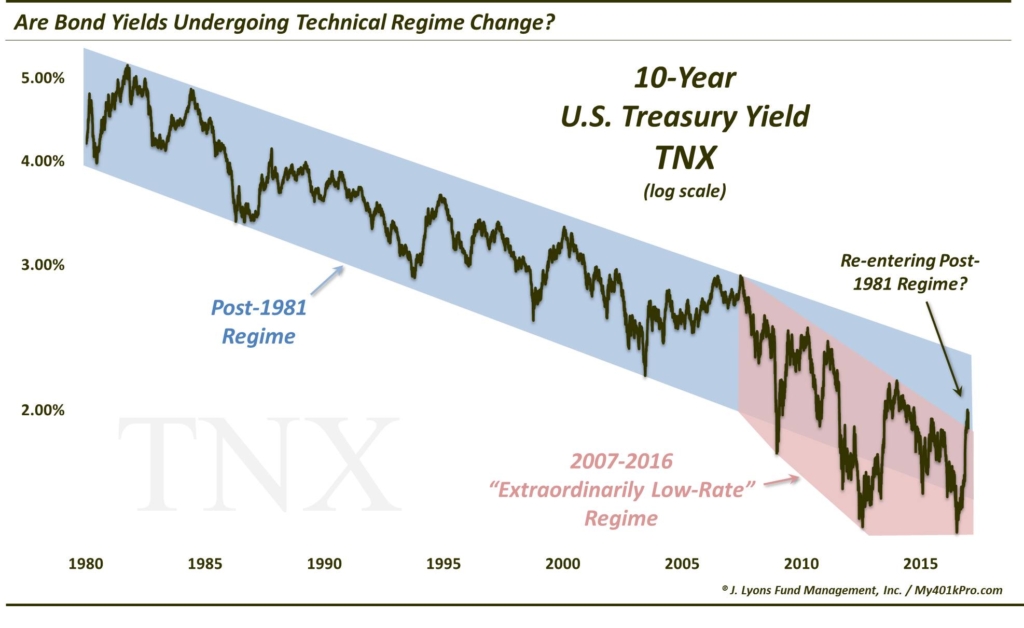 Should 10-Year Yields drop back below the post-2007 Down trend line, it is possible that they fall back into the regime that has contained them since 2007. And while the TNX has work to do for that to occur, there are a few factors favoring that possibility, including the Commitment Of Traders positioning in T-Note futures as well as the fact that 30-Year Yields never broke above their post-2007 Down Trendline.

Of course, should the former resistance at this 2.30%-2.40% level become support, the TNX will have likely entered a new regime, or more accurately, its former, post-1981 regime. In that case, yields won’t necessarily have ended their secular decline, just the recent “extraordinarily low-rate” regime. At a minimum then, the upper bound on yields would be significantly higher, specifically the post-1981 Down trendline, currently intersecting near the 3.50% level. In this scenario, we would expect an eventual test of that line.

For that reason, the present test by the TNX may be a critical one to monitor.