The drop in oil prices has gotten most of the attention, but commodities across the board have been selling off.

With prices down over 20% the first half of this year, much has been made of the deflation in crude oil. But while some blame the idiosyncrasies related to the energy sector, the deflation that we’re witnessing is actually a lot more widespread than is perhaps being recognized. In fact, while crude prices are hitting 7-month lows, much of the rest of the commodity complex is plumbing even greater depths, at least according to one broad measure.

Specifically, the Thomson Reuters Equal Weight Commodity Index (EWCI) measures the performance of the following 17 commodities, on an equally-weighted basis: Cocoa, Coffee, Copper, Corn, Soybeans, Cotton, Crude Oil, Gold, Heating Oil, Lean Hogs, Live Cattle, Natural Gas, Platinum, Silver, Soy Oil, Sugar and Wheat. Thus, unlike a composite like the CRB Index, the EWCI’s fate is not unduly tied to just one or a few commodities like crude. Rather, it is more representative of the broad commodity class.

And based on the EWCI, the broad commodity class is now at 52-week lows. 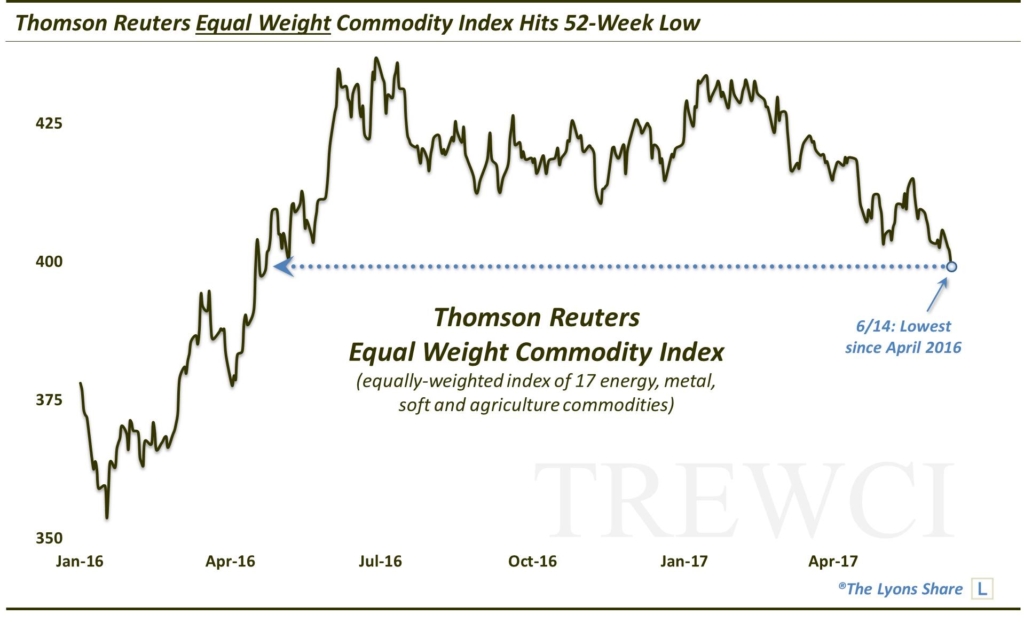 This, again, may be a surprise to some after the much-publicized “reflation” trade of 2016. And perhaps it is just a partial retracement of last year’s move. However, considering the effects that the deflationary commodity spiral had on the global economy and financial markets in 2014-2015, it also may be an unwelcomed development.

Now, we’re not suggesting that deflation is spiraling out of control again like it did during that period. However, given the breakdowns in some commodities, as well as some resource-heavy equity markets, folks that are expecting reflation to continue to lead a global economic resurgence may be, er, deflated when this reality hits.

If you want the “all-access” version of our charts and research, we invite you to please check out our new site, The Lyons Share.

END_OF_DOCUMENT_TOKEN_TO_BE_REPLACED

Here are some of the most noteworthy trendline developments across the markets for Wednesday, November 6, 2019.   Value Line Geometric Composite $VALUG Testing Breaking Post-2018 Down…