The following post was initially issued to TLS members on December 21.

Some of the areas that enjoyed the biggest 2016 post-election bounces have seen the entire gains wiped out.

What a difference 2 years makes. At this time in 2016, we were talking about the blistering rally taking place in the equity market following the U.S. Presidential election. The so-called “Trump Bump” was on a record-setting pace for biggest gains following a Presidential election. This included the general indices as well as certain sectors that enjoyed the most meteoric of rises following President Trump’s election. One such group was the regional banks.

As we posted on Twitter and StockTwits at the time, the post-election move in the regional banks was absolutely insane. As measured by the KBW Regional Bank Index (KRX), the group bounced a staggering 20% in the week following the election! The index would go on to an eventual gain of over 30% as of June of this year.

Fast forward 2 years. Since June, the KRX has lost a staggering 30%. That has brought it right back to the level (~87) it was at on the day of the 2016 election. In other words, as of the past few days, the KRX had lost its entire post-election gain. The whole Trump Bump is history. 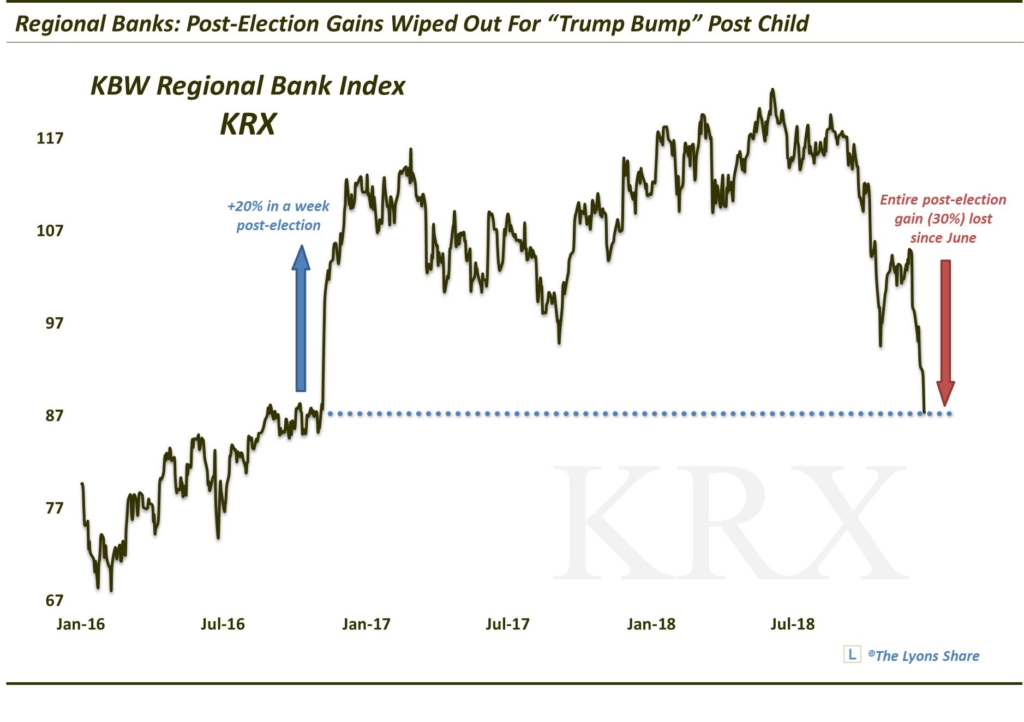 So what now? Is this merely an interesting piece of end-of-the-year market trivia? Nope, there is at least an excellent short-term trading opportunity here, in our view. Where is that opportunity? In several dumped “Trump Bump” areas…starting with regional banks themselves.

First off, the KRX testing the post-election launch point is probably reason enough to attempt a short-term long trade in the group, using the SPDR S&P Regional Banking ETF (KRE). However, bolstering that case is the presence of several other key layers of support on the KRX near the 87 level, including: 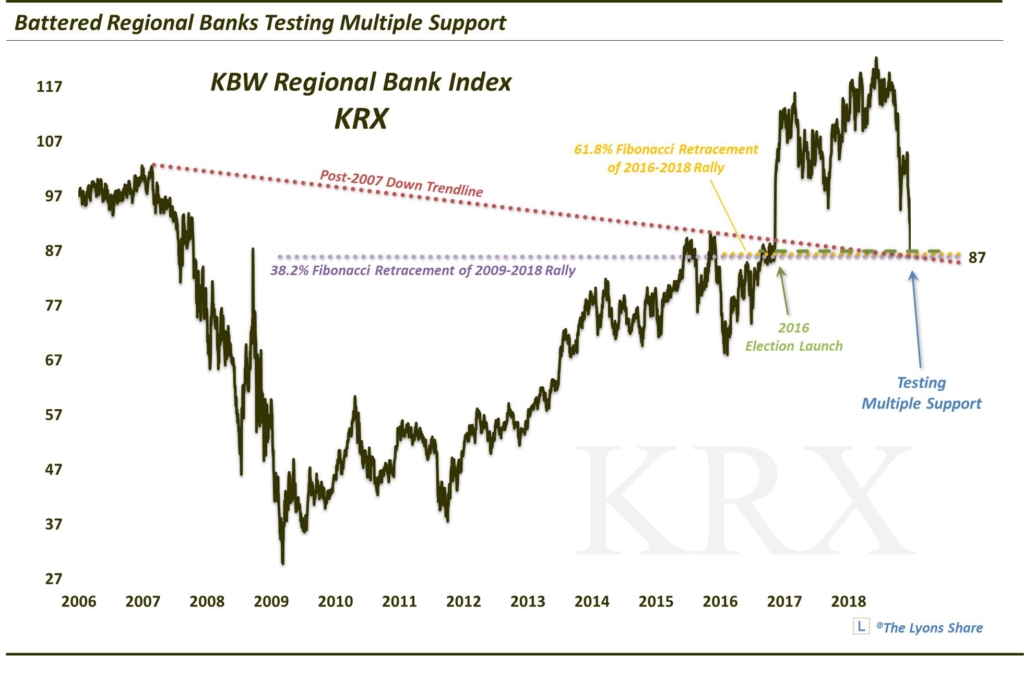 The corresponding level on the KRE would be in the current vicinity between 45-46. So what are the expectations for a potential rally? Nothing long-term. We expect the complete unwind of the Trump Bump implies an eventual breakdown of the 87 KRX level and new lows. The would also fit with our view of a budding bear market here. However, that would not preclude a healthy (and easy) near-term bounce in the KRX to perhaps 95 (~9%) or 100 (~15%). On the KRE, corresponding levels would be ~50 and ~53.

If you are interested in an “all-access” pass to our research and investment moves, we invite you to further check out The Lyons Share. Given the treacherous market climate we expect to persist, there has never been a better time to reap the benefits of our risk-managed approach. Thanks for reading!

Regional banks have been on a run of late, but are encountering resistance stemming from 2011. Over the course of the post-February stock rally, the…

END_OF_DOCUMENT_TOKEN_TO_BE_REPLACED

Bank stocks spiked on rate hike speculation; however, potential chart resistance suggests their upside may be limited. The big news in the markets this week…

END_OF_DOCUMENT_TOKEN_TO_BE_REPLACED

Based on the chart of the KBW Bank Index, Jamie Dimon’s decision to purchase shares of JPMorgan may have been well timed. The buzz surrounding…