With at least the broader U.S. stock market taking a bit of a breather over the past few months, several foreign markets around the world have taken the opportunity to play a little catch-up. These moves have set several country indices up for potentially significant further long-term advances. One such country is Switzerland.

Switzerland, known for its chocolate confections, hit our radar about a year ago due to its sweet-looking chart set-up. For much of the same reasons as then, it is intriguing to us again now. As we mentioned in a February 2018 post:

“As we have been pointing out in our DSS videos, the Switzerland Swiss Market Index (SMI) is forming a potential cup-&-handle going back to 2007. This, of course, is traditionally a bullish pattern and, in this case, the potential bullish implications upon a breakout would be substantial. For instance, one common targeting technique would imply a 50% price appreciation above the previous highs — after a breakout, of course.”

We emboldened that last phrase because, well, the SMI never did break out. However, that is not to say the past 14 months have been unproductive. In fact, one can argue the now complex cup-&-handle has merely added another handle. Alternately, whereas the 2015-2018 period serves as the handle to the 2007-2015 cup, the past 14 months may serve as a handle to the 2015-2018 cup.

In any event, the longer-term chart structure of the SMI looks potentially exceedingly bullish. 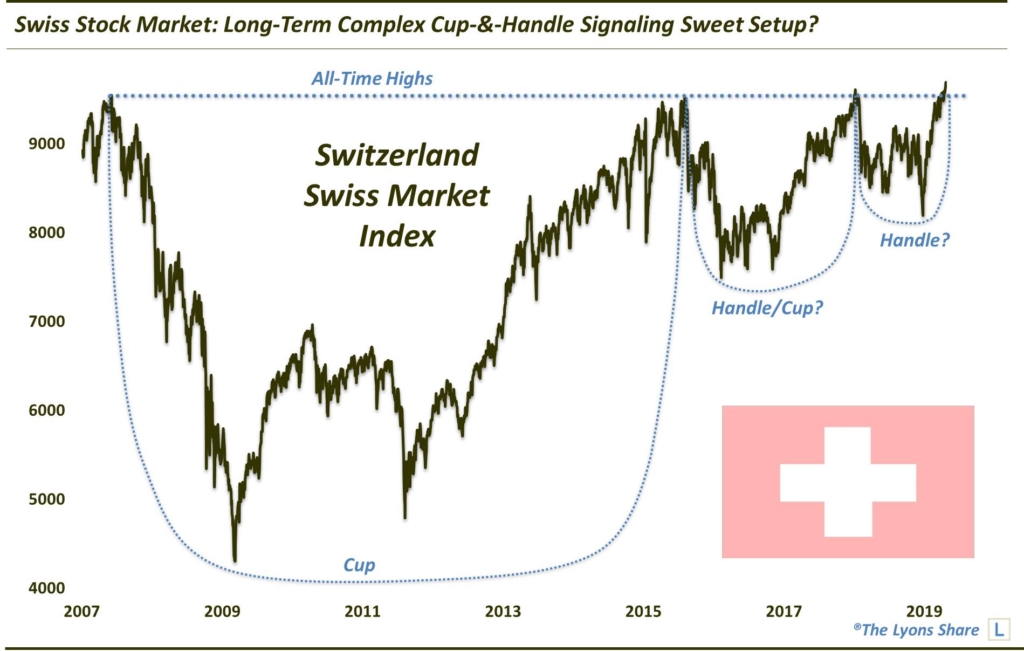 We say “potentially” because, once again, the pattern is all for naught if it cannot sustain a breakout. However, if it does, this is one foreign index with a pretty sweet longer-term set-up.

If you are interested in an “all-access” pass to our research and investment moves like these every day, we invite you to further check out The Lyons Share. Given a potentially emerging treacherous market climate, there has never been a better time to reap the benefits of our risk-managed approach. Thanks for reading!

Here are some of the most noteworthy new highs and lows across the markets for Friday, November 1, 2019.   Russell 3000 Index $RUA Hitting…

END_OF_DOCUMENT_TOKEN_TO_BE_REPLACED

Over the past few years, the U.S. has borne much of the weight in terms of global equities. Except for India and just recently, China,…