The Global Dow Index has broken above its post-2007 downtrend.

One theme we highlighted coming into 2017 was the potential chart resistance facing many global equity markets following the sharp “Trump rally”. This included the Global Dow (GDOW), a broad index of mega-cap global companies, as we mentioned in a late December post. The specific resistance we noted pertaining to the GDOW in particular was a Down trendline stemming from its 2007 all-time high and connecting the tops in summer 2014 and spring 2015.

This trendline held the GDOW back from December into mid-January. However, this week’s global equity rally has seen the GDOW eclipse that post-2007 Down trendline, currently near the 2590 level. 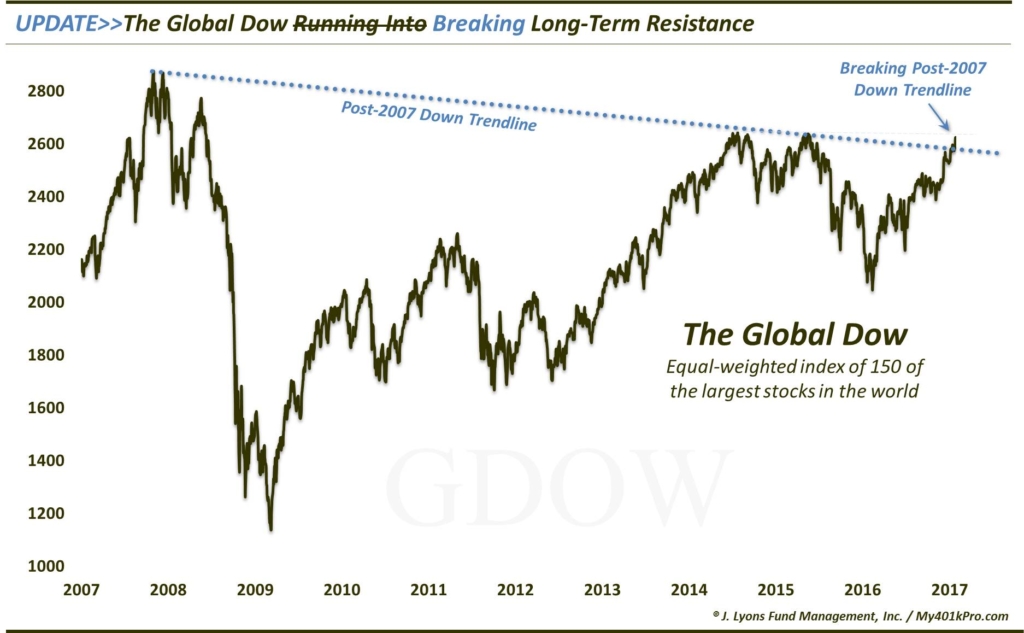 The break of this 10-year trendline removes a major chart impediment and opens up considerable upside for the GDOW. That said, it is not necessarily all free and clear for the index (though, it never is). One immediate obstacle facing the GDOW is the lateral resistance in the 2640′s range, representing the 2014-2015 highs. Yesterday’s high in the index was 2638.54, so we are essentially there now. A pause here and possible test of the trendline breakout level near 2590 would not be a surprise.

As we have mentioned often regarding the Global Dow, one reason we like tracking it is that it adheres very well to various technical charting analyses.

This again may be a surprise for some to learn since there is not much actual money traded based off of it. There is a U.S.-based ETF, however, that tracks the GDOW. It is the SPDR Global Dow ETF, ticker, DGT. And since the Global Dow is priced in U.S. Dollars, the DGT does not have the currency headaches that most internationally-focused equity ETF’s do. For that reason, it tracks the GDOW pretty closely and it too broke above its post-2007 Down trendline this week.

The theme of this week in the equity market has been “breakouts”. And while everyone is well aware of Dow 20,000 by now, and perhaps the more important breakout in the NYSE that we wrote about on Wednesday, it has not just been about domestic stocks. International stocks, which have for the most part lagged their U.S. counterparts for many years, have improved their technical prospects significantly in recent weeks and months. This includes the Global Dow Index, a good sign for the intermediate-term prospects for international equities.

Here are some of the most noteworthy new highs and lows across the markets for Friday, December 13, 2019.   NYSE Composite $NYA Hitting New…

END_OF_DOCUMENT_TOKEN_TO_BE_REPLACED

The following post was originally issued to TLS members on 12/10/2019.   Following another successful “BTD”, what are our next moves? As TLS members know,…