Speculators (a.k.a., “dumb money”?) are holding their largest net-short position in the history of the VIX futures contract.

Every week, the CFTC releases their Commitment Of Traders (COT) report on the collective positioning among major futures players. Like most market data, the majority of the time, we do not find the COT report on a particular contract to be of much use. However, we do make it a habit to note any extremes in trader positioning as the data can be quite enlightening at such junctures. For example, this morning we released our Chart Of The Day on Twitter and Stocktwits noting the record net-short position among Speculators in VIX futures. This can be helpful since these Speculators are notoriously off-sides at extremes. 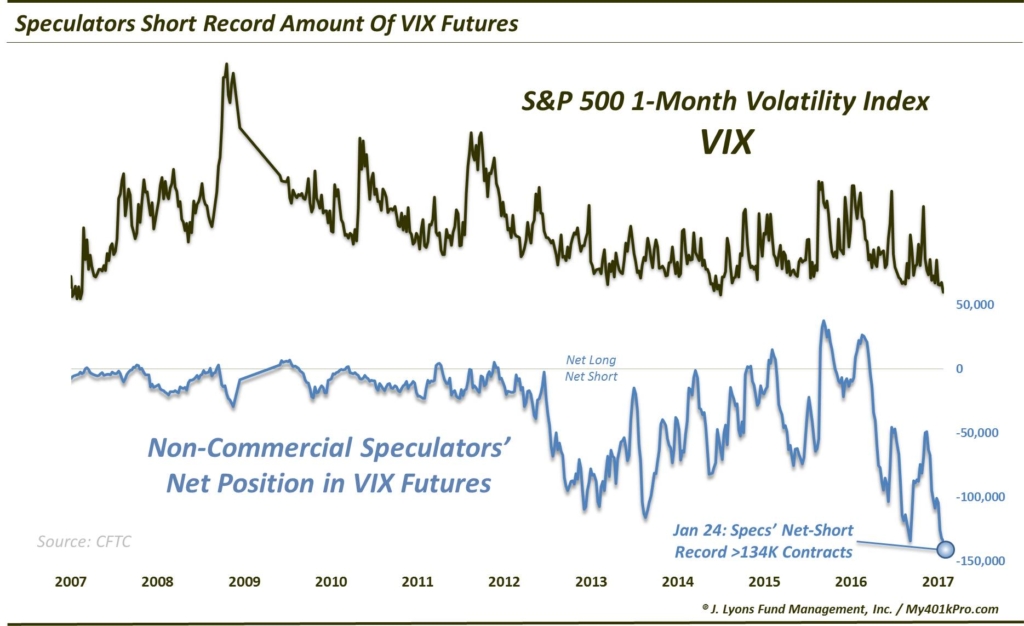 As a reminder, “Speculators” (e.g., hedge funds, commodity funds, etc.) typically exhibit trend-following behavior, i.e., they build positions in the direction of prices. Thus, in a trending market, they can be on the right side for an extended period. However, where they earned their “dumb money” moniker is at key inflections and turning points.  Again, that is because they’re often wrongly positioned at such times, and to an extreme.

In today’s example, we see these speculators held a collective net-short position of more than 134,000 VIX (S&P 500 1-month Volatility Index) contracts. That is a record amount going back to the inception of VIX futures in 2007. Therefore, it’s safe to say that speculators are fairly confident that stock volatility will remain low in the foreseeable future. Any time we see their confidence, and investment positioning, at an extreme, it raises our antenna.

Note that the Speculators’ previous record net-short position in VIX futures occurred in early September 2016, just days before the S&P 500 broke out of a historic trading range by dropping more than 2½% in a day – and the VIX soared by 70%. Again, these extremes can always get more extreme, and these speculators do not always receive their comeuppance in such short order. But it typically does come, eventually.

You might also note on the chart the massive expansion in interest in this contract around 2012. This was no doubt spurred by the proliferation in VIX-based exchange traded products. We must concede that the environment now may certainly be different in character and behavior than it was prior to the emerging popularity of these ETP’s. However, our anecdotal evidence is that the contrarian signals generated by extremes in VIX futures positioning have been more effective in recent years.

Speculators had better hope that’s not the case.