The big geopolitical event this weekend is Sunday’s much anticipated election in France. Because of the multiple candidates, their vastly differing political views and the realization that no outcome can be ruled out given the series of “unanticipated” results in high-profile elections over the past year, the hype surrounding this election is off the charts. With that said, let’s go on the charts, a place where we are more comfortable in contrast to political bloviating.

On the charts, we find French stocks at a very interesting juncture entering the election. Specifically, the French CAC-40 is testing its long-term Down trendline (on a linear scale), stemming from the all-time highs back in 2000. 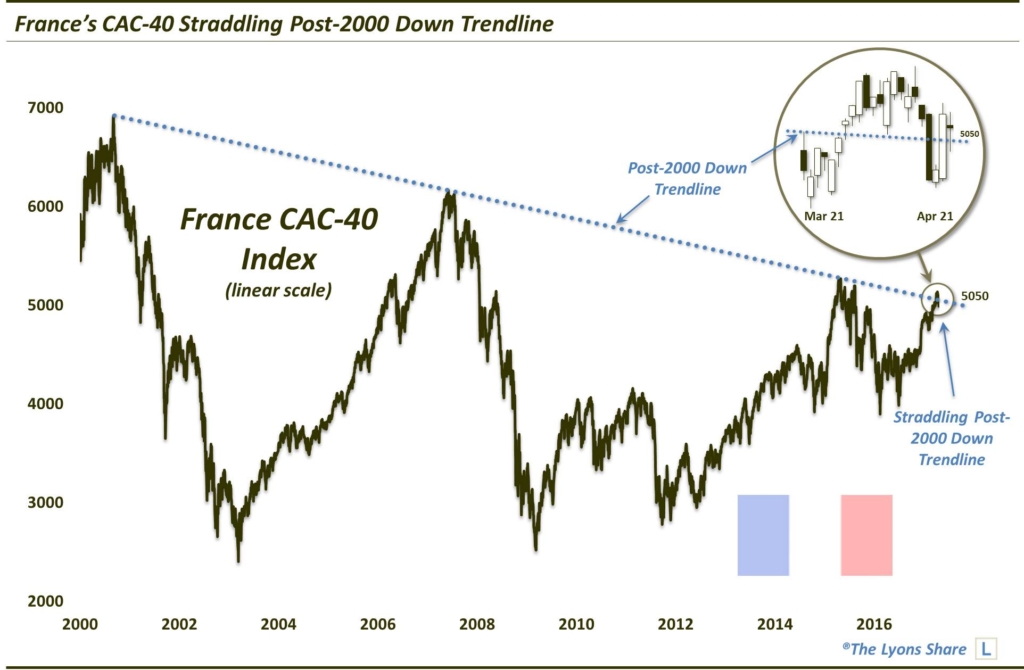 We have been tracking this trendline, which connects the 2000 and 2007 tops as well as the 2015 tops,  on social media for several years now. That included this Tweet almost exactly 2 years ago announcing the CAC-40′s arrival at the trenline for the first time in 8 years. As it turns out, the trendline would hold for another 2 years, at least.

Most recently, on March 10, as the index revisited the trendine for the first time since 2 years ago, we posted this piece. The index has struggled since, though it managed to temporarily leap over the line at the end of March for the first time in 17 years. This week, in the buildup to the election, the CAC-40 has traversed back and forth across the line several times like a jittery boxer before a fight. Ultimately, it closed at 5059, almost right on the 17-year trendline which presently sits near the 5050 level.

So what will happen? We have no way of knowing, with the election or with French stocks. However, after some potential whiplashes, you can expect the trendline to be relevant as it has been for the better part of 2 decades. Thus, let’s not make it complicated: above the trendline, stocks have a better shot at rallying; below the trendline, the CAC-40 should continue to find the line serving as its pièce de résistance.

Like our charts and research? Get an All-Access pass to our complete macro market analysis, including tons of charts and ideas like this EVERY DAY, at our new site, The Lyons Share.