The yield on the 30-Year U.S. Treasury Bond is (again) threatening to break out of its ultra low-rate environment.

Among the most important developments in a busy few weeks in the financial markets has been the rise (and breakout, in some cases) in bond yields. For example, the yield on the 10-Year U.S. Treasury Note (TNX) recently broke above its highs of a year ago and is now testing levels not seen in about 4 years. And as today’s Chart Of The Day reveals, the 30-Year yield (TYX) is testing a potentially consequential level of its own.

Speaking of a year ago, it was about this time last year that we pointed out the notable potential development occurring as a result of the upward action in the TNX. At that time, we introduced the notion of a “regime change” in the bond market. Specifically, we argued that the TNX was possibly emerging from the nearly decade-long “extraordinarily, or ultra, low-rate regime”.

Put simply, the TNX at the time was threatening to break above the Down trendline that had confined it to those ultra-low levels since the peak in 2007. It wasn’t not necessarily that the long-term downtrend in yields that began in the early-1980’s was ending — just the steeper ultra low-rate regime that characterized yields during the financial crisis and its aftermath. If the multi-decade downtrend in rates was to end, however, this signified the first, necessary step.

The TNX did indeed break the post-2007 ultra low-rate, regime-defining line. And as the updated chart below reveals, after several months of successfully testing that line in 2017, we now find the 10-Year yield breaking out to multi-year highs — and possibly on its way to test the post-1981, loooong-term Down trendline (currently ~3.45%). 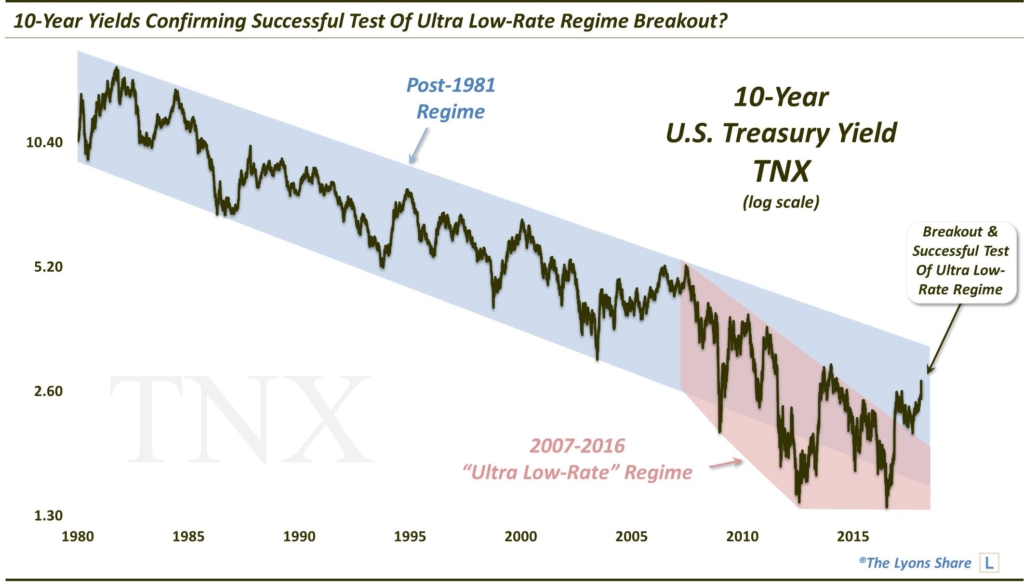 Finally, after much reluctance, the 30-Year yield is joining the TNX in its ascent. And as the Chart Of The Day below shows, the TYX is now testing its own regime-defining line — the Down trendline from its 2011 top (currently around 3.05%). 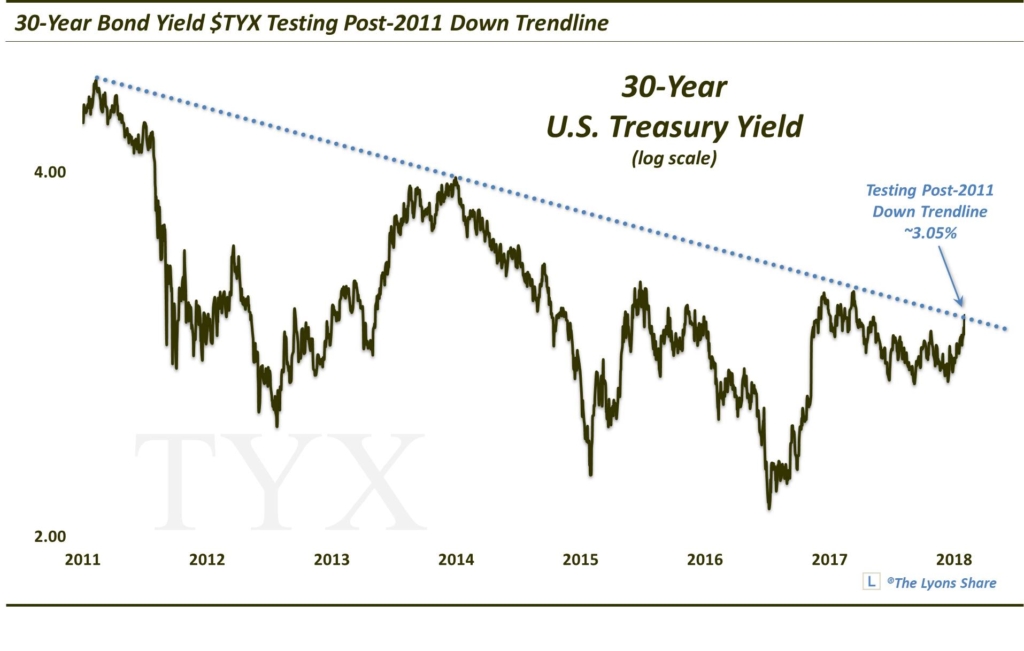 Will this line break — and officially break the 30-Year yield out of its own ultra low-rate environment? Eventually, yes, though, whether or not it’s on this attempt remains to be seen. If it does breakout, what is the next upside target? As with the $TNX, likely it will be the upper trendline that has been constraining the TYX since the early 1980’s, currently close to the 4% level.

As always, we will keep The Lyons Share members informed of critical levels on the TYX and TNX — and all of the major markets — on a daily basis in our Daily Strategy videos as well as other Premium Posts. If you are interested in the Premium version of our charts and research, check out our “all-access” service, The Lyons Share. You can follow our investment process and posture every day — including insights into what we’re looking to buy and sell and when. Thanks for reading!