Back in early May, we noted that the commodity complex, stuck in a multi-year malaise, was potentially on the cusp of a big move. At least, that was our read based on the chart of the Thomson Reuters Equal Weight Commodity Index (EWCI). As a refresher, the EWCI measures the performance of the following 17 commodities, on an equally-weighted basis: Cocoa, Coffee, Copper, Corn, Soybeans, Cotton, Crude Oil, Gold, Heating Oil, Lean Hogs, Live Cattle, Natural Gas, Platinum, Silver, Soy Oil, Sugar and Wheat.

We like to track the EWCI since, given its weighting structure, its fate is not unduly tied to just one or a few commodities like crude (as is the case with composites like the CRB Index). Rather, it is more representative of the broad commodity class. And, as we noted at the time, the EWCI was testing a potentially important juncture that could go a long way toward determining the next big directional move in commodities.

The juncture was the level near 435 on the EWCI chart which contained several key potential resistance points, not the least of which was the post-2011 Down trendline. Its reaction at that level, we surmised, may well dictate the next big move in the space. So what was the verdict? After a brief (e.g., 1 week) foray above the level, the index would fall back below it. And as false breakouts (and breakdowns) tend to do, the fakeout did indeed lead to a big move — down. 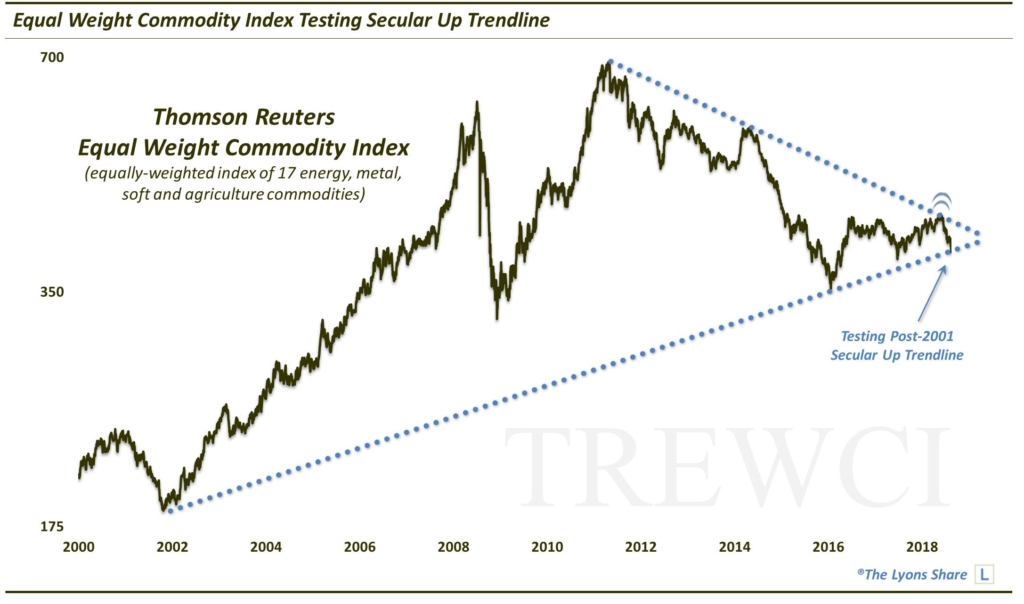 2 months later, the EWCI is some 10% lower than last May’s critical juncture point. Its plunge may be arrested soon, however, as the index finds itself at another potentially critical chart juncture near the 397 level. This time, it is an Up trendline stemming from its 2001 secular low and connecting the 2016 low.

The index has spent the past few days toying with the level, including Wednesday’s temporary breakdown. If that move results in a false breakdown, it could have a similar impact on the EWCI as the false breakout in May (this time to the upside). If so, commodity bulls may get some relief, at least temporarily, from the pounding they’ve received the past few months. At some point, the EWCI will have to contend again with the post-2011 Down trendline within a contracting, long-term pennant pattern. However, that would mean a nice, tradeable bounce first.

Then again, should the trendline give way, the bears may be able to back up the truck on the resulting down side.

If you’re interested in the “all-access” version of our charts and research, please check out our new site, The Lyons Share. You can follow our investment process and posture every day — including insights into what we’re looking to buy and sell and when. Plus, our Pre-FALL Sale (25% OFF!!) is going on now so it’s a great time to sign up! Thanks for reading!