The following post was originally issued to The Lyons Share members on August 28; coffee prices, and BJO, are up roughly 14% since then (so far).

Coffee speculators have never been more short the commodity; are they about to get burned?

After enjoying a bit of a resurgence in recent years, most of the commodity complex has had a rough go of it over the past several months. And needless to say, the poor price action has taken its toll on investor sentiment. Perhaps no market provides a better example of such dour circumstances as does the coffee market.

As today’s Chart Of The Day illustrates, the price of coffee, as represented by the S&P GSCI Coffee Index (SPGSKC) just traded at its lowest level (~76.50) in the index’s (albeit brief) history. Significantly, the price also undercut its previous lows near 78 from 2007, 2008-2009 and 2013. And on the sentiment front, the data matches price’s gloomy performance. According to the CFTC, Speculators in coffee futures have adopted their largest net-short position in the history of the contract – by far. 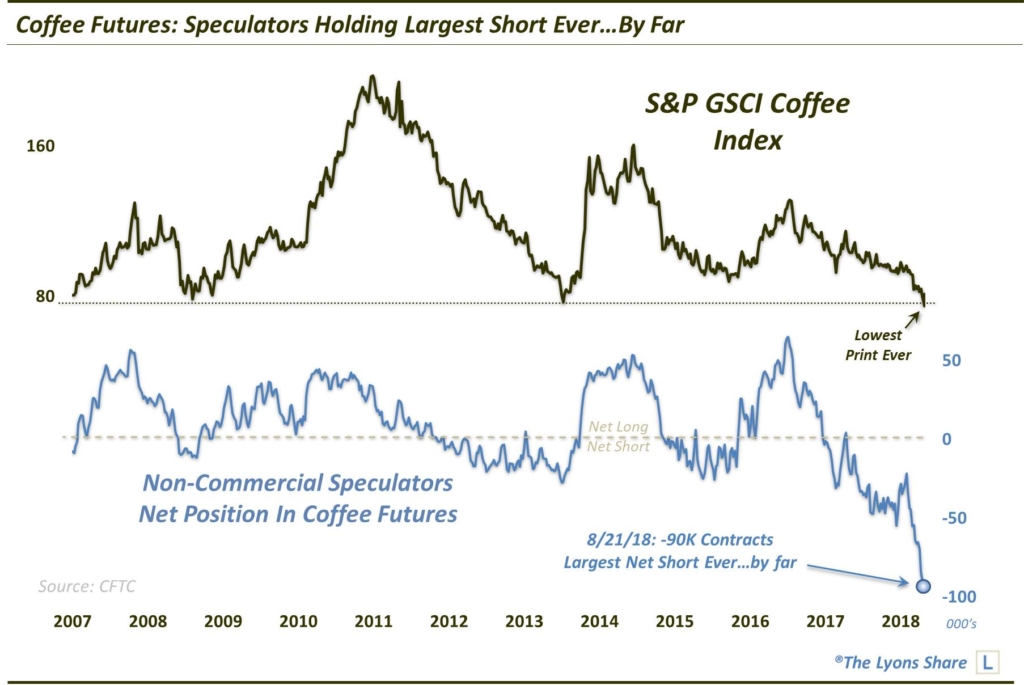 So are coffee prices due for a bounce? In other words — are these traders due for a wake-up call?

While we typically prefer to buy “relative strength”, the price development on the coffee index is intriguing to say the least, especially as it has reclaimed those former lows near the 78 level. We would feel better about “catching the knife” if the index re-tests the lows of last week in the mid-70’s and reverses again back above 78. At this point, as long as the SPGSKC is above $78, we are comfortable owning coffee proxies — at least for a trade.

What makes us more comfortable about a coffee long is the potential tailwind coming from the CFTC data. To reiterate, via the Commitment Of Traders Report (COT) on coffee futures, Non-Commercial Speculators are net-short 90,000 coffee contracts. To put that into perspective, prior to this past year, the record net-short position was 27,000 contracts. For that matter, prior to the past month, the record was 55,000, set in April. So not only is there a record short position among the group, it has accelerated considerably over the past 5 weeks.

This could be important, if prices start to turn higher. As we have mentioned in the past, Speculators are considered the “Dumb Money” because they are typically wrongly positioned at key turning points — and to an extreme. If you look at prior bottoms in the coffee market, you’ll see that Speculators were well off-sides, i.e., short, at those junctures.

Lastly, besides the technical and positioning reasons outlined above, another factor may aid in a rebound in coffee prices as well: seasonality. Courtesy of the research site, SentimenTrader.com, we see that coffee has entered its seasonally strongest period (August-December) of the year. In fact, based on the average historical yearly price movement, coffee bottoms on day #232 of the year. Last week’s low occurred on day # 234. Now, obviously we cannot rely on this seasonal data to that level of specificity, but it is the “right” time of the year for coffee prices to bounce.

So how does one take advantage of this potential opportunity? Obviously, the futures market is one avenue (we do not utilize futures in our management practice). Another way is through an exchange traded product. Now, 2 popular coffee ETP’s, ticker symbols JO and CAFE were closed down this past spring. While that removes some accessibility for traders and investors, it is anecdotally a good sign in terms of contrarian sentiment. We have seen countless times in the past when funds have been closed due to low interest (due to poor performance) — just before that sector or asset bottoms out.

Fortunately, there is a new fund, the iPath B Bloomberg Coffee Total Return ETN (ticker, BJO) that was recently introduced (perhaps the former funds, also iPath funds, were rolled into BJO). In any event, BJO has closely tracked the GSCI Coffee Index since it was introduced earlier this year. Thus, in the case of a major reversal in coffee prices, the BJO should participate. Indeed, the fund did bounce off of the lows (~$38) last week along with the index. That establishes a level against which we can now trade. Specifically, as long as the BJO remains above that $38 level, we can be long the fund, with a stop-loss on a close below.

So combining the lifetime price support in play, a record potential tailwind from the futures market and potential positive seasonality, coffee prices may indeed get their long-awaited jolt.

Here are some of the most noteworthy trendline developments across the markets for Wednesday, October 2, 2019.   Russell 2000 $RUT Testing Post-2018 Up Trendline…

END_OF_DOCUMENT_TOKEN_TO_BE_REPLACED

Down over 20% just since election day, coffee prices may presently be testing a key level of support. The out-sized moves set in motion on…