The following is a complementary look at the type of research we deliver to TLS members on a daily basis. Please contact us if you have any questions — or take advantage of our biggest sale of the year and become a member now.

3 of our favorite indicators of risk continue to signal “risk off”.

In analyzing risk in the market, we predominantly rely on quantitative models that we’ve developed over the years. However, there are other indicators that we’ve found helpful in instructing us as to the “risk-on” vs. “risk-off” situation in the market. These indicators can provide helpful clues as to the potential strength or durability of market rallies. The last time we updated them in a post was in mid-August. Our conclusion then:

“Taking stock of the combination of these 3 “risk-on/risk-off” measures, we find adequate reason for some concern. There are certainly enough positives in the market to maintain moderate long exposure to stocks. Furthermore, the broad market would appear to be setting up for a breakout to new highs. However, given the status of these risk indicators, an aggressive play on the potential breakout is probably not warranted. Furthermore, should the broad market break out, and these risk measures fail to follow along, it could be an indication of a likely failed, or temporary, breakout.”

Indeed, the broad stock market would break out to new highs in the final days of August — and immediately fail from there. The large-cap indices were able to hold up for about another month before they too failed to maintain their breakout levels. The continued deterioration in the risk indicators into those late September-early October highs further convinced us of the likely fallibility of the breakout and the weakness that would follow.

In our present case, we take stock of the 3 risk indicators once again in an attempt to determine the amount of risk remaining in the selloff and the potential for a turnaround.

High-Beta Vs. Low-Volatility (Status: RISK OFF)

One such risk-on indicator can be found in the “high-beta” area of the market – especially in its behavior relative to “low-volatility” stocks. To track these groups, we use the Invesco S&P 500 High Beta ETF (SPHB) and the Invesco S&P 500 Low Volatility ETF (SPLV). We have found that typically when the ratio of SPHB to SPLV performance is rising (e.g., 2012-2015, 2016-2018), it is an indication of “risk-on” – and constructive for the prospects of the overall market. When the ratio turns lower (e.g., 2011, 2015-2016), we’ve found the opposite message to be true, i.e., “risk-off”. This chart illustrates that idea. 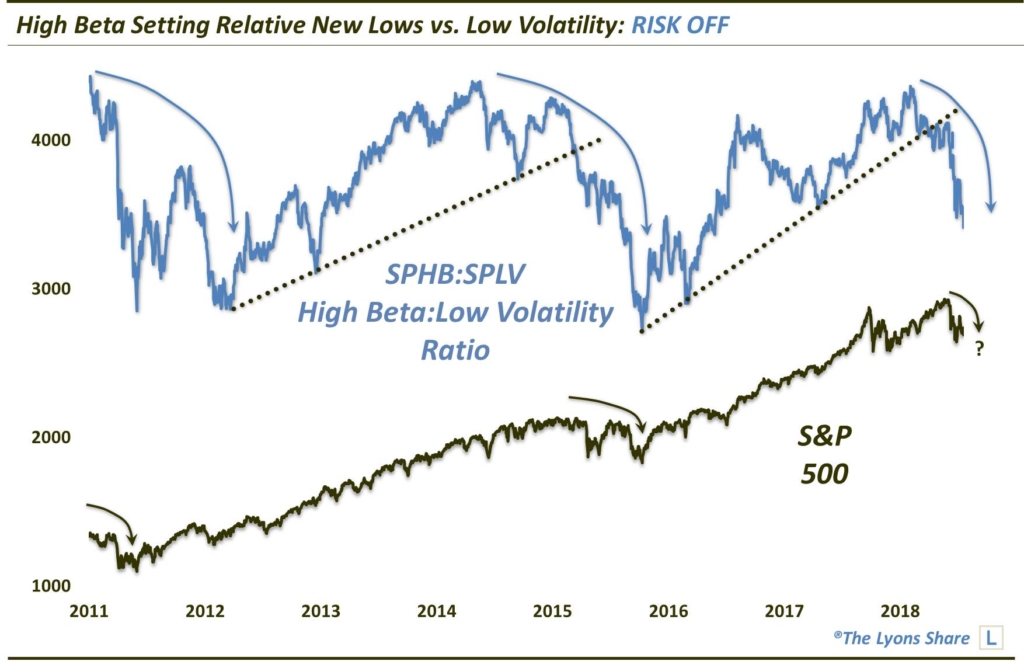 Back in August, we first noticed the developing breakdown in the SPHB:SPLV ratio, and the potentially negative implications for the market. The ratio would continue to lead the stock market decline lower into the late October correction low.

So what is it signaling now? After a temporary bounce off of the October low, the ratio is once gain setting new correction — and multi-year — lows. Those hoping to see an imminent end to the correction would rather have the ratio positively diverging vs. its October low to indicate a decreasing risk situation. However, the fact that the ratio is again dropping to new lows is a sign of continued elevated risk in the market.

When it comes to market “styles” (e.g., small, mid, large-cap and growth vs. value), the small-cap pure value style traditionally has the highest beta. And like the “high-beta” stock segment mentioned above, the S&P 600 Small-Cap Pure Value Index (SPSPV) typically leads the way in a legitimate risk-on market rally — and lower in a risk-off move. For example, the SPSPV led the way higher during the beginning of rallies starting in January and November 2016, August 2017 and February of this year. We have seen the opposite situation since August. 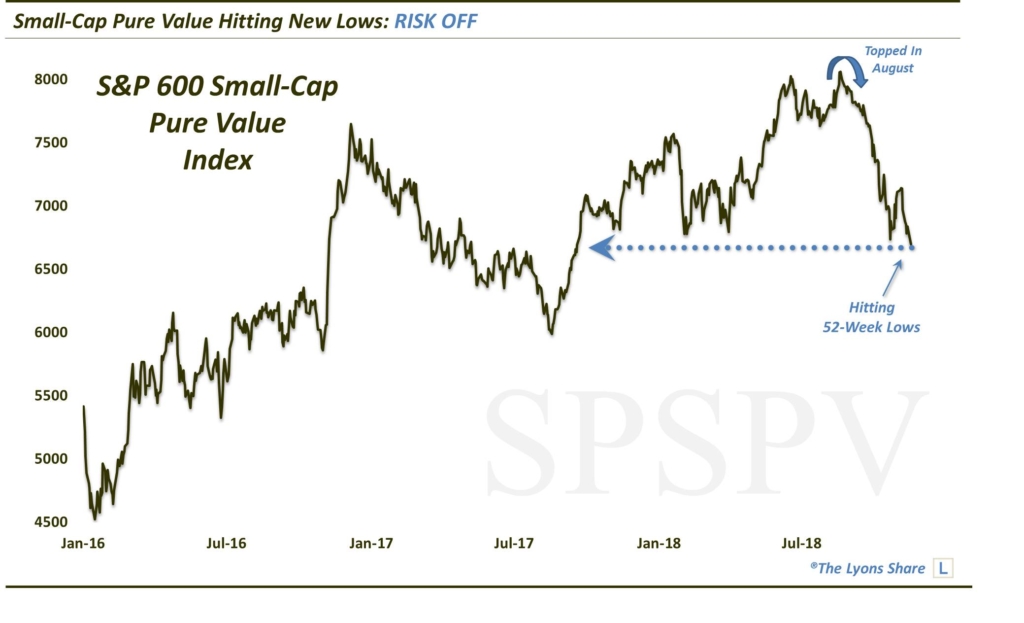 In our August post, we noted preliminary signs that the SPSPV was beginning to lag badly behind most of the other style segments. As it happens, the index would top out within days and begin a steady descent, even as the large-caps made a series of further new highs. This was another red flag for us regarding risk. Obviously, in hindsight, the caution was warranted as a broad market correction unfolded.

So what about now? One of the best signs that stocks were not “off to the races” following the late October low was the anemic bounce in the SPSPV as it failed to retrace even 38.2% of the initial correction decline. And presently, we find little reason to believe that risk has been adequately wrung out of the market in the near-term. That’s because the SPSPV was one of the first indices to actually eclipse the initial October correction low yesterday. When risk levels are finally appropriate for stocks to form a low and begin rallying on a more durable basis again, look for this index to display more resilience than this. 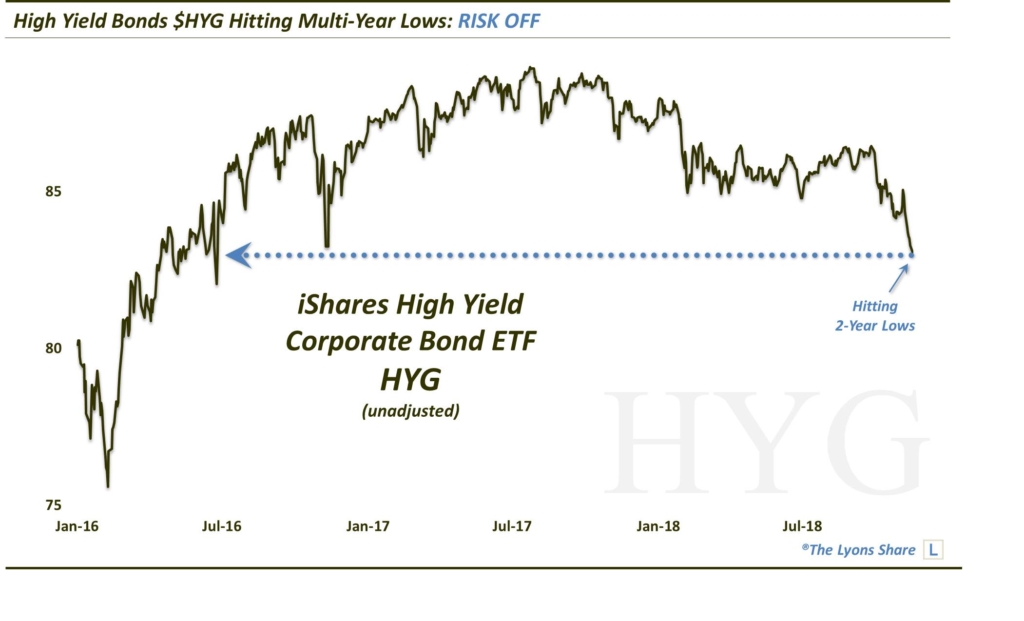 In August, we noted that the iShares High Yield Corporate Bond ETF (HYG) was running into some potential resistance on its chart (on an unadjusted basis). Indeed, the fund would be within 0.25% of its eventual rally high. Its behavior following would raise alarm bells as the HYG dropped to a new 52-week low at the initial correction low in late October.

Things have not improved since. The fund undercut its October low a week ago and has been declining since. It is now trading at multi-year lows. That is not indicative of a situation whereby risk has adequately been wrung out of the market and investors can begin aggressively buying back in.

While the stock market correction has certainly wrung out some of the excess risk that we were warning about in late summer, it does not appear to be enough to yet lay the foundation for an intermediate-term low and a new durable rally. The status of the 3 key risk indicators above each indicate a continued elevated level of risk in the stock market at this time. Therefore, our focus would not yet be on significantly increasing equity exposure in anticipation of an impending successful re-test of the October low. Rather, we will continue to be more focused in the near-term on reducing exposure, or hedging into any near-term market strength.

For updates on these risk indicators as well as market levels, timing and investment selection, continue to monitor our Daily Strategy Session videos.

If you are interested in an “all-access” pass to our research and investment moves, we invite you to further check out The Lyons Share. FYI, we are currently holding our BLACK FRIDAY SALE — our BIGGEST SALE OF THE YEAR. So considering the discounted cost and the current treacherous market climate, there has never been a better time to reap the benefits of our risk-managed approach. Thanks for reading!