The stock of Apple is getting pummeled; how far down could it go — and what are the key levels to watch?

The stock market’s rally off of our “once a decade” support levels continued on the first day of of the new year yesterday. Despite a large gap down to start the day, stocks recovered to close positive. For the rally to continue on day 2 of 2019, they will have to overcome another large gap down at the open. The culprit is Apple following its earnings warning.

Let’s cut to the chase — how far down might Apple drop? What are the key levels? For starters, we are not surprised to see the stock gap down to where it did…and stop. That’s because, as we discussed in today’s Daily Strategy Session, the ~$143-$144 level contains a confluence of key Fibonacci Retracements, including: 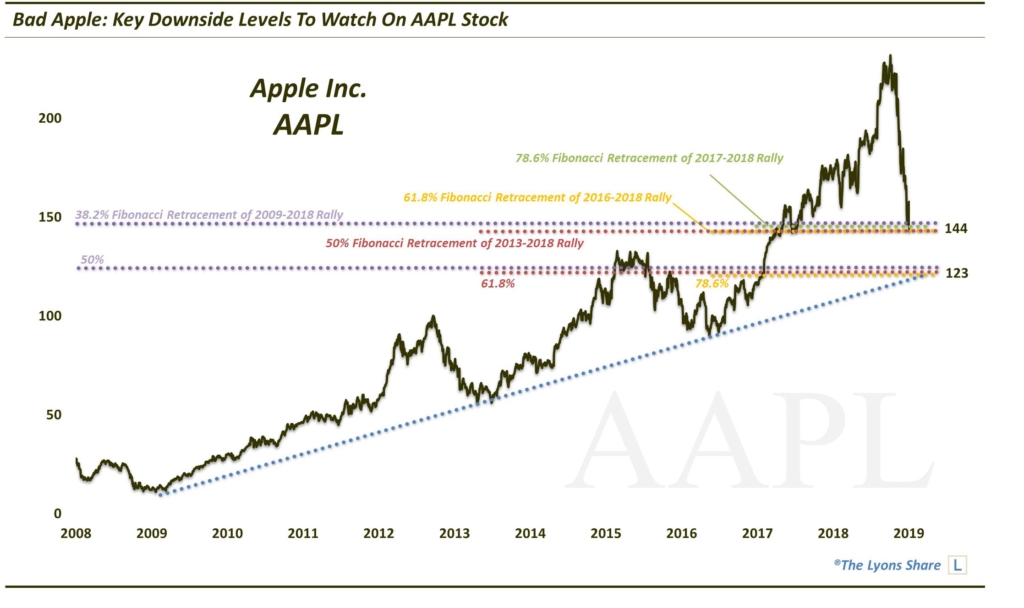 Some small leeway (i.e., a few points) below should be granted given the volatility. So a few days may be required to let things shake out. Should this level get decisively taken out, however, the next level to target on the downside is ~$121-$123. Key levels there include:

Indeed, given the importance of the layers there, as well as the longer-term bear market we expect is underway, we would expect that eventually AAPL gets down to that lower level. However, perhaps not before a bounce attempt from current prices near $143, as unlikely as that seems in the midst of the current onslaught.

As always, stay tuned to the Daily Strategy Sessions for further updates.

If you are interested in an “all-access” pass to our research and investment moves, we invite you to further check out The Lyons Share. Considering the treacherous market climate we envision for some time, there has never been a better time to reap the benefits of our risk-managed approach. Thanks for reading!

The following post was originally issued to TLS members on January 15, 2020.   Key developments in the stock market are prompting a new phase in…

END_OF_DOCUMENT_TOKEN_TO_BE_REPLACED

Here are some of the most noteworthy new highs and lows across the markets for Friday, December 27, 2019.   Nasdaq 100 $NDX Notches Record…

END_OF_DOCUMENT_TOKEN_TO_BE_REPLACED

While stock averages are back at all-time highs, a corresponding abundance of New Highs AND New Lows may be sending a warning. We’ve written several times…