While stocks recently soared to new highs, the volatility market stubbornly held its ground; similar situations have — at times — marked significant tops in the past.

Some stock market highs are better than others. And at times, the volatility market can give us clues as to the nature of such new highs, i.e., whether they are likely to be sustained — or if they are more fragile and unstable. For example, at last August’s highs in the stock market, volatility conditions were such that the new highs appeared potentially dubious to us. Sure enough, the highs were unable to be sustained and the market got wrecked in the 4th quarter. Last week, as stocks were scoring new highs again, we saw some potentially unwelcomed behavior once more from the volatility market.

Specifically, on June 20 the S&P 500 (SPX) jumped nearly 1% to close at a new 52-week high. Under such conditions, we like to see volatility expectations dropping as sort of a confirmation of the new high. However, despite the strong move to new highs, the VIX (S&P 500 Volatility Index), which generally moves opposite the SPX, actually closed higher on the day. Now, this is just a 1-day event. However, similar occurrences in the past have at times indicated that all was perhaps not so healthy with the new high. 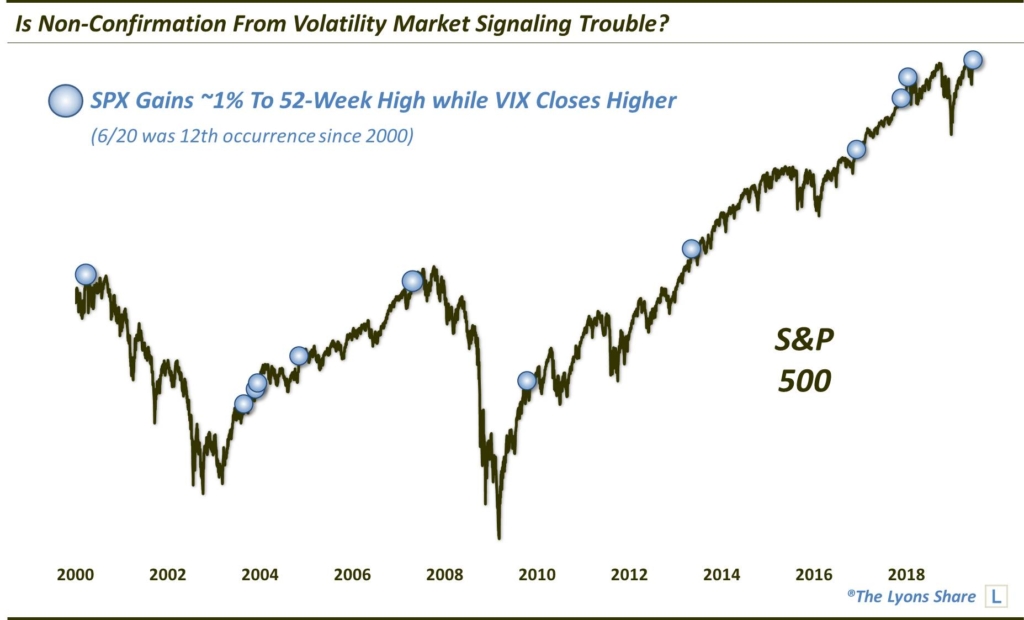 As this chart demonstrates, this was the 12th time in the past 20 years that saw the S&P 500 rise roughly 1% to a new high while the VIX closed higher on the day. 2 of the instances (March 2000 & April 2007) occurred in close proximity to cyclical tops. Furthermore, the last occurrence took place at the intermediate-term top in January 2018.

That said, most of the other events led to benign to solid stock returns going forward. Thus, like most data points, this event doesn’t necessarily lay out a clear road map going forward, but is just one piece of the analytical tapestry. In this case, we don’t consider the aforementioned conditions to be serious enough to warrant an evacuation from the stock market. However, it is a red flag to keep in mind, especially if the volatility market continues its non-confirming behavior.

Members, remember to stay tuned to the Daily Strategy Sessions for updates.

Want to know what our takeaway is from this signal – and how we are acting upon it? We invite you to check out The Lyons Share, a daily “all-access” pass to our research and investment moves. Given what should be a forthcoming exciting, volatile and opportunistic market climate, there has never been a better time to reap the benefits of our risk-managed approach. Thanks for reading!