One seasonal statistic suggests July was not a major top in the stock market.

Stock investors have had a rough week (at least up until today). However, in addition to today’s rally, there may be a historical and seasonal cause for hope that the bull market is not done just yet. That’s because it would be unprecedented if last month had marked a major market top in the market.

Why is that? Well, since 1900, using the Dow Jones Industrial Average (DJIA) as a gauge, the stock market has never put in so much as a 12-month top in the month of July. 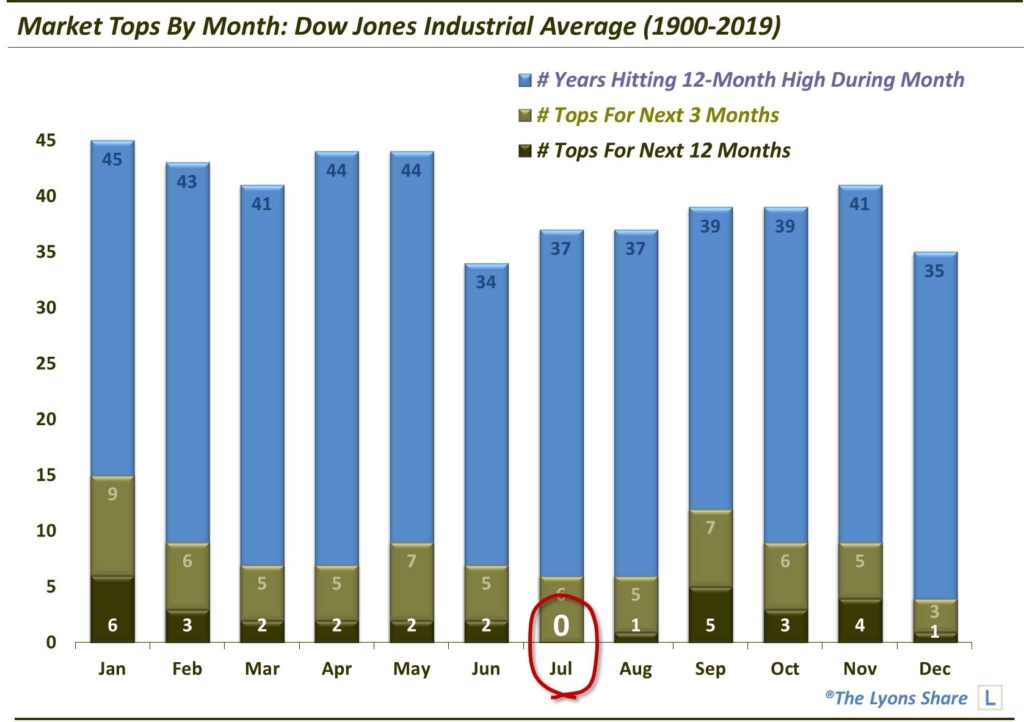 Of course, there is certainly a first time for everything. Furthermore, seasonality is typically but a minor influence on stock prices. However, considering that in the past 119 years, the stock market has not once formed a 1-year top during the month of July, it at least causes us to wonder if there isn’t something structural to the phenomenon.

Consider the fact that the DJIA has scored a 52-week high during 37 July’s since 1900 and not a single one of them held as the high for the next 12 months. Contrast that with January, for example, which has seen the DJIA form a 1-year top 6 times – or 14% of the years in which the index hit a 52-week high during the month.

That’s also not to say that the market hasn’t put in a top of some significance in July, even if following the historical script. That’s because the DJIA has put in at least a 3-month top on 6 occasions in July. There have also been some near-misses for the month of July in terms of putting in a 12-month top. 2007, for example, saw just a slight, temporary higher high in October which prevented a July 12-month top.

Therefore, a shorter-term top of some significance, in the DJIA or other indices, cannot be ruled out. However, it would be unprecedented in 119 years if the DJIA couldn’t make at least one move above last month’s highs.

If you’re interested in the “all-access” version of our charts and research, we invite you to check out our site, The Lyons Share. Considering the potentially treacherous market climate, there has never been a better time to reap the benefits of our risk-managed approach. Thanks for reading!