The 3rd quarter of election years has been the best performing quarter of the entire Presidential Cycle — though, there are some caveats.

While it is typically well down on our list of investing inputs, seasonality can have a meaningful influence on markets. In fact, in the long-run, there have been few trading systems that would have kept pace with even a rather simple seasonality system. And one of the seasonal patterns with a respectable track record is the Presidential Cycle. The Presidential Cycle refers to the behavior of the stock market vis-a-vis a 4-year Presidential term. Throughout time, stocks have tended to do very well during some periods of the Cycle, and not-so-well during other parts. It is not a fool-proof system, but it has behaved consistently enough to seriously consider its statistical merit.

Given its track record, we are in a particularly interesting period of the Cycle. Specifically, since 1900, the best performing quarter of the Presidential Cycle, using the Dow Jones Industrial Average, has been the 3rd quarter of election years (i.e., the quarter that started July 1). During the 30 cycles since 1900, the 3rd quarter of election years has averaged nearly 5%. Thus, we should not be surprised to see stocks off to a strong start to the quarter thus far. 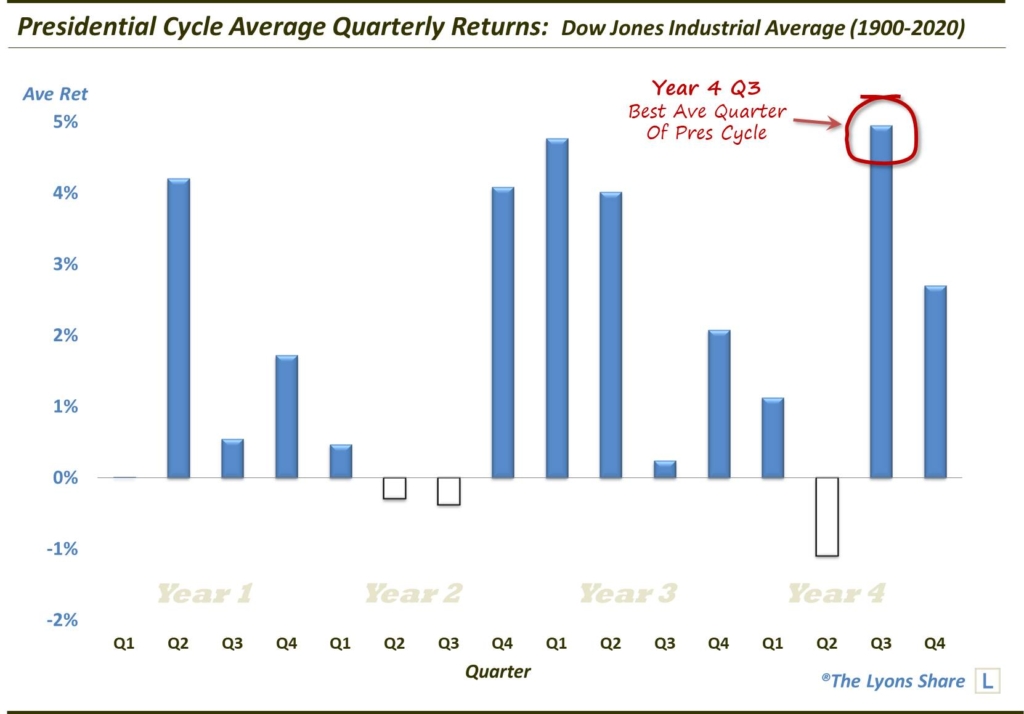 Before we get too carried away, however, there are a few caveats that may prevent one from becoming too blindly bullish.

First, seasonality does not work every time. There are periods of out-performance and periods of under-performance — that’s how you come up with an average! One need only look at the prior quarter to see that the pattern does not always work. While the 2nd quarter of election years is, on average, the worst performer of the entire Cycle, stocks put up their best quarter in over 30 years, coming off of the March crash.

Lastly, and speaking of 1933, some folks would take exception to including results back to 1900. They would instead advocate for beginning the study in 1934, following passage of the 20th Amendment which pulled forward the inauguration date and Congressional start date to the January following the election. So while we would still default to the “more data is better” philosophy, perhaps they are onto something. If we do start in 1934, the average return for the 3rd quarter of an election year drops to +0.9% and to the back half of all returns. Furthermore, just half of the quarter’s returns over the time frame were positive, placing it with the 1st quarters of Year 1 and Year 2 as the least consistent gainer.

So while seasonality in general, and the Presidential Cycle specifically have respectable track records, there are plenty of other factors that we would focus on first as inputs into our investment decision-making process. To the extent that the Cycle is a gentle influence on prices, we consider it a positive one for the duration of this quarter given the quarter’s status as the best-performing quarter of the Cycle. However, based on more recent performance, we would have to temper that enthusiasm a bit.

How much “stock” are we putting into this data point? How is it impacting out investment posture? If you’re interested in an “all-access” pass to all of our charts, research — and investment moves — please check out our site, The Lyons Share. You can follow our investment process and posture every day — including insights into what we’re looking to buy and sell and when. Thanks for reading!