Non-Commercial Speculators’ net-short position in VIX futures just spiked to its largest ever.

The proliferation in exchange traded products (ETP’s) has certainly marked a new era of investment accessibility by the masses. Individual investors now have vehicles by which to gain exposure to all sorts of markets that were previously difficult for them to access. One of the byproducts of this boom has been an explosion in futures interest as that market is vital in providing liquidity — directly or indirectly — for many of the new ETP’s.

One class of ETP’s that has seen an explosion in its underlying futures market is stock volatility. Interest in volatility-related instruments, e.g., the “VIX”, has seen a parabolic increase in recent years. For example, just 5 years ago, the largest ever net-short position by Non-Commercial Speculators in VIX futures was around -30,000 contracts. By comparison, this past week, we saw VIX Speculators’ net-short position spike to a record of more than -170,000 contracts. 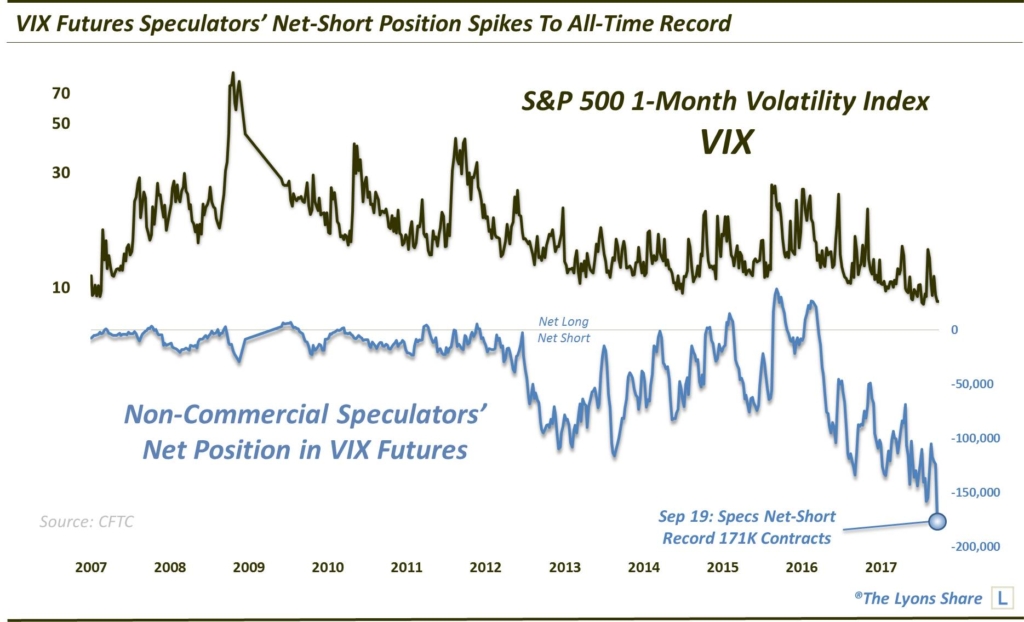 One imponderable surrounding this data point and others associated with the ETP proliferation is the unintended consequences of such a boom in speculation, both on the futures side and on the ETP side. The ETP era has yet to really experience a significant bout of adversity in the financial markets. In fact, the recent period has been among the calmest ever across asset classes — no doubt contributing to the data point in question. We admit to harboring some concern about the stability of markets overall, not to mention the financial well-being of individuals involved in these new markets, should significant turbulence strike.

The other obvious point of interest regarding the chart and data point is its present context or message. We wrote about it the last time we noted a record VIX Speculator net-short position in late June (just days before the VIX jumped by some 50% on an intra-day basis). Our thoughts are the same now as they were in that post:

“Once again, futures Speculators are known as “dumb money”, not because they are always wrongly positioned — far from it. However, at positioning extremes, and at key turning points in the underlying markets, they are typically off-sides.

Presently, we cannot say that volatility is at a turning point, i.e., about to surge higher. We won’t know that until after the fact. Additionally (and, importantly), we cannot say that stock prices are about to collapse due to record low volatility levels. Volatility reached record low extremes in the mid-90′s, just prior to a historic boom in stock prices (FYI, a repeat of that occurrence is decidedly NOT our expectation).

What we can say is that Speculators are holding an extreme short position, by historical standards. Now, extremes can always get more extreme. However, history tells us that once these investors all move to one side of the boat, like the “herd” in any market, they reliably end up “in the water”, eventually.

Therefore, while the market calm may persist indefinitely, don’t expect these folks to lead you to safety before the next storm hits.”