The percentage of financial assets that households currently have invested in stocks has only been exceeded by the 2000 bubble.

From the Federal Reserve’s latest Z.1 Release (formerly, Flow Of Funds), we learn that in the 2nd quarter, household and nonprofit’s stock holdings amounted to 35.7% of their total financial assets. This is the highest percentage since 2000. In fact, the blow-off phase from 1998 to 2000 leading up to the dotcom bubble burst was the only time in the history of the data (since 1945) that saw higher stock investment than now. You might say that everyone is in the pool. 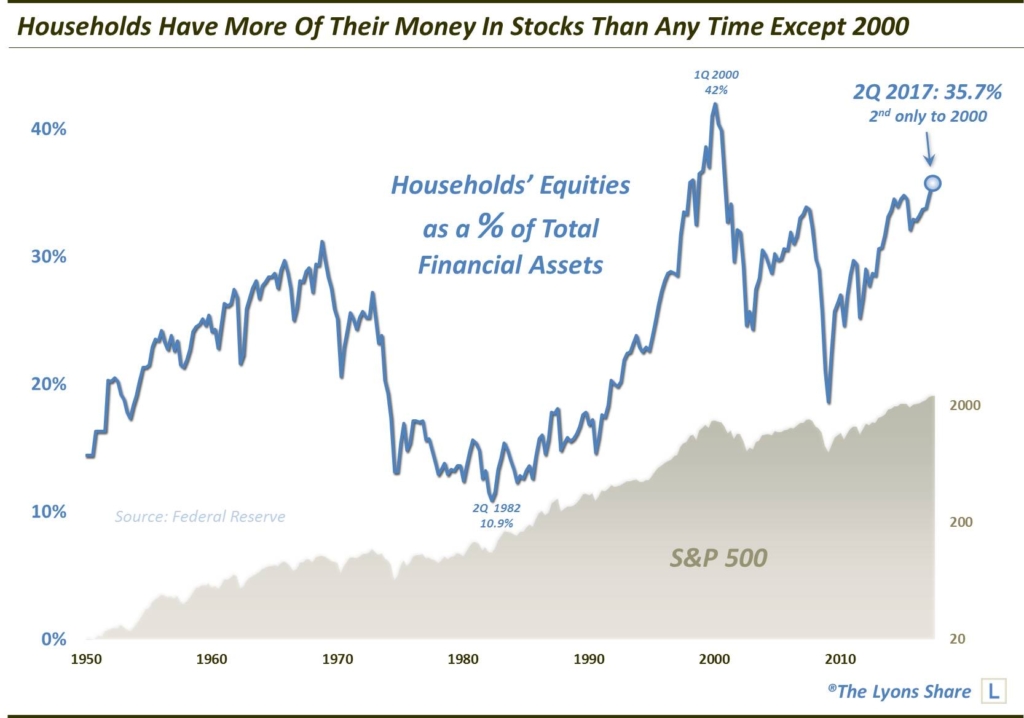 We’ve talked about this data series many times. It is certainly not a timing tool. Rather, it is what we call a “background” indicator, representative of the longer-term backdrop — and potential — of the stock market. It also serves as an instructional lens into investor psychology. For these reasons, it is one of our favorite metrics pertaining to the stock market, as we wrote in a September 2014 post:

What is the significance of the current reading? As we mentioned, it is the highest reading since 2000. Considering the markets are at an all-time high, this should not be surprising. In fact, while most of the indexes surpassed their prior peaks in early 2013, household stock investment did not surpass the 2007 highs until the first quarter of this year. The financial crisis put a dent in many investors’ psyches (along with their portfolios) and they’ve been slow to return again. However, along with market appreciation, investor flows have seen at least streaks of exuberance over the past 18 months, boosting investment levels.

Yes, there is still room to go (7.5 percentage points) to reach the bubble highs of 2000. However, one flawed behavioral practice we see time and time again is gauging context and probability based on outlier readings. This is the case in many walks of life from government budgeting to homeowner psychology to analyzing equity valuations. The fact that we are below the highest reading of all-time in stock investment should not lead one’s primary conclusion to be that there is still plenty of room to go to reach those levels.