A recent reading in one broad measure of consumer stock market sentiment was among the most bullish in history.

Perma-bulls like to label this bull market the “most hated” in history. While the rally is historic by some metrics, the “most hated” status, to the degree that it was ever applicable, has certainly fallen by the wayside by now. To be sure, there are plenty of vocal and visible perma-bears that have been spewing copious amounts of “hate” at this rally for years now. However, if one steps away from the confines of financial social media and guru-dom, evidence shows that public sentiment has grown to now reflect among the most bullish conditions in recorded history.

While there hasn’t been a flashy, parabolic melt-up sucking up investor capital, it’s likely that the sheer duration and overall magnitude of the bull market has had a cumulative effect on investor sentiment. One example comes from our Chart Of The Day based on the University of Michigan’s Survey of Consumers. One of the questions asked of respondents in the survey is their estimation of the “probability of an increase in the stock market in the next year”. Among the various ways that UM breaks down the data is by taking the mean response to that question. And in August’s survey, the mean response came in at 62.7%. 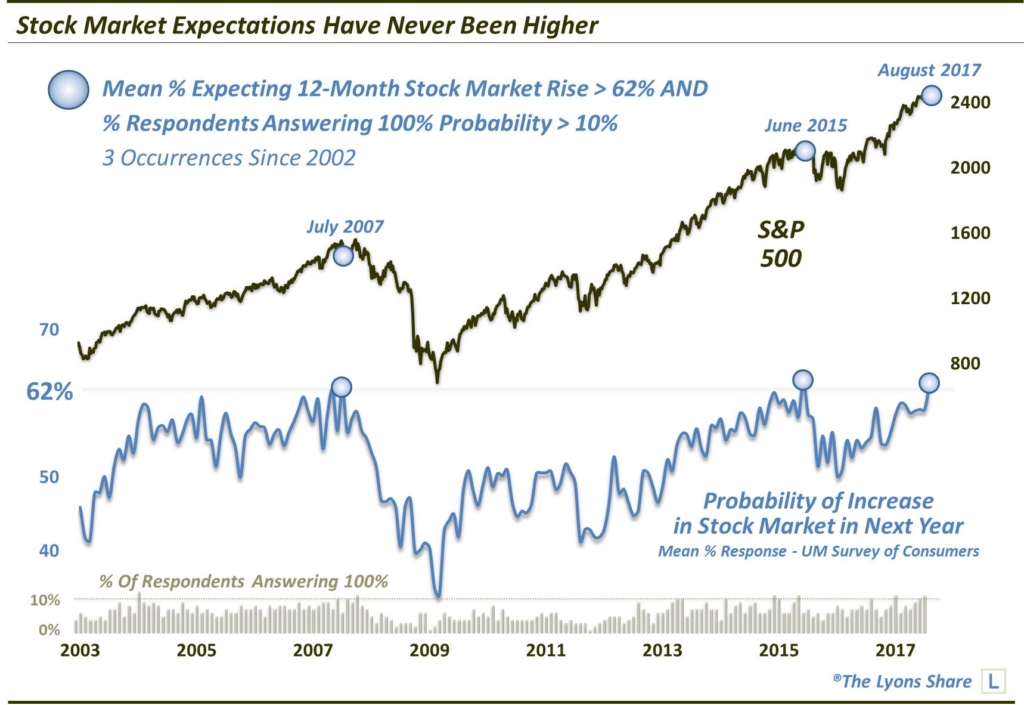 Now admittedly, the data series has only been around since 2002. However, it should at least put to rest the moniker of “the most hated rally in history”. It should also serve as a red flag regarding the longer-term prospects of the current rally. It certainly is possible that the survey reading gets more extreme, and that stocks continue to run higher in the meantime. However, given the nearly immediate negative aftermath following the prior 2 extreme readings, the odds are probably stacked against a sustainable longer-term rally.

Another interesting breakdown provided by the survey looks at extreme responses rather than the mean. When tallying the survey results, the UM breaks the responses down by quartiles (i.e., the % of respondents expressing a probability between 1%-24%, 25%-49%, etc.). They also provide the percentage of respondents who say there is a 0% chance of a stock market rally over the following year as well as the percentage of respondents saying there is a 100% chance. Not surprisingly, a high level of these respective responses have come at interesting junctures, i.e., the wrong junctures.

Obviously the 2007 instance marked a cyclical top. The June 2015 instance preceded a nasty intermediate-term decline. The others preceded, at best, several months of no progress for the stock market. After a few months following the reading this past February, the large-cap area of the market did resume making higher highs. However, the broad market made no progress at all until this past month.

Again, this sentiment reading does not guarantee the imminent end to the stock market rally. Indeed, there is nothing to say these data points can’t go to more extreme levels — even unprecedented levels. However, surveys like this represent what we call “background indicators”. These “soft” data points that don’t necessarily constitute actionable signals or triggers. Rather, we view them as measures of longer-term “potential risk” in the market.

Oh, and as a reminder, this survey reading was as of August. If they loved ’em in August, we can’t wait to see the September reading.

END_OF_DOCUMENT_TOKEN_TO_BE_REPLACED

Despite the melt-up in the Nasdaq, volatility expectations remain elevated.