Chile’s benchmark stock index is testing a major confluence of support, including the former 2010-2011 all-time highs.

One good thing about this bull market is that while some segments become extended, others pull back to support levels, providing favorable risk/reward entries for those looking to add equity exposure. This is precisely the game plan we have been employing for some time as we have taken some profits in areas like large-caps and technology and looked to re-deploy the capital elsewhere. One prime example of a favorable setup right now is in one of the hot emerging markets over the past 2 years: Chile.

Followers of ours may remember us first highlighting the benchmark Chilean IPSA Stock Index back in April 2016, asking is Chile’s Stock Market About To Get Hot? The IPSA had just re-tested a massive cluster of support and was threatening to break a long-term Down trendline stemming from its 2010-2011 all-time highs. We posited that the IPSA was indeed likely to break the trendline which would open up considerable upside. The first logical upside target figured to be those 2010-2011 all-time highs near 5050, or roughly 25% above IPSA prices at the time.

Well, the IPSA did break the trendline. It then took about 15 months for the index to reach those prior all-time highs, as we noted in July. It did not slow down too much from there as it would rally another 10% into late October. As we often say, breakouts that are not preceded by at least a moderate consolidation or pullback quite often end up being false breakouts, or at least require some subsequent solid testing of the breakout level. That’s where we find the IPSA currently, after being rocked to the tune of about -5.5% yesterday. 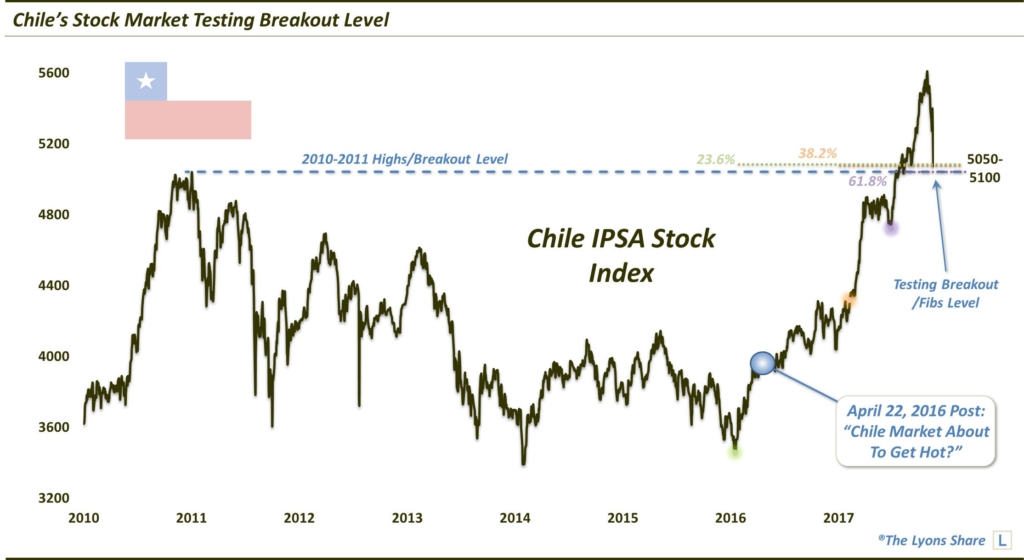 The bad thing about the selloff is it has unfolded fairly violently. Typically, that leads to a significant period of healing or stabilization prior to bouncing. However, we have seen this market get rocked before and recover quickly, not to mention Brazil’s mini-crash in May from which it immediately bounced back.

The best thing about the selloff is that, again, it has brought prices right down to the 2010-2011 former highs/breakout level. Especially on the first foray back to the breakout level, we would expect at least a moderate bounce off of the level. As we also like the market on a long-term basis, this could be an extremely inviting entry point from a risk/reward standpoint.

Another good aspect about this level is the cluster (again) of significant Fibonacci Retracement levels lined up here, stemming from important junctures since the 2016 low. These include:

The presence of these Fibonacci lines in the same vicinity of the former all-time highs/breakout level gives us even more confidence in the validity of this support near 5050-5100. Whether for a short-term bounce or a long-term entry, this looks like one of the more favorable setups we have seen all year.

So, how can one take advantage of this potential opportunity? Again, the best way in the U.S. to access exposure to Chilean stocks is the U.S.-based ETF, the iShares MSCI Chile Capped ETF, ticker, ECH. Like any international equity ETF’s, the ECH is subject to currency effects, not to mention a stock basket which may not resemble the key local country index, e.g., the IPSA. Nevertheless, the ECH does show high correlation with the IPSA and generally moves in tandem. Thus, it is also favorably positioned, though in a different way. As the following chart shows, the ECH is presently testing the top of its broken post-2010 Down trendline. This could aid in providing a springboard for the ECH, along with a successful test of the IPSA. 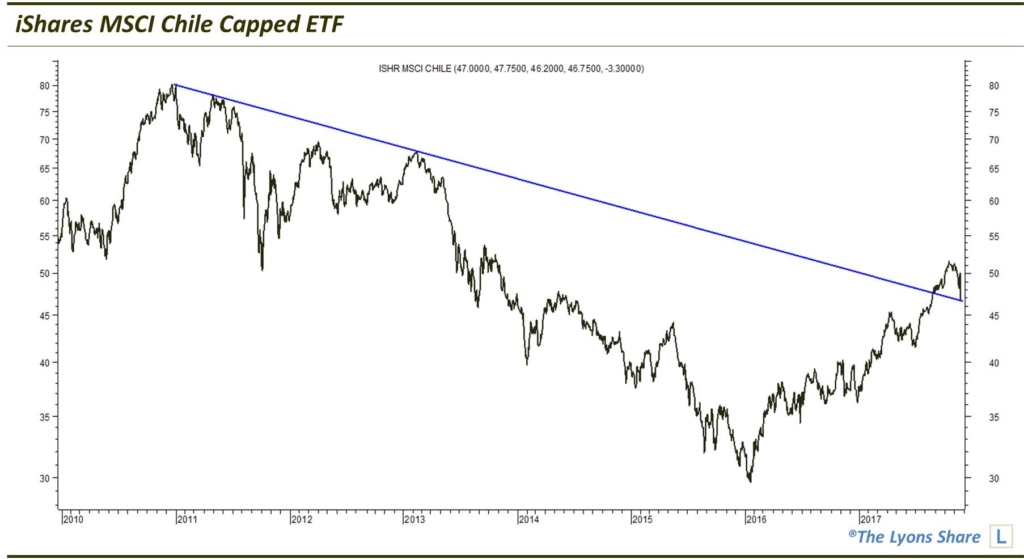 Here are some of the most noteworthy new highs and lows across the markets for Friday, November 22, 2019.   General Electric $GE Hitting 1st…

END_OF_DOCUMENT_TOKEN_TO_BE_REPLACED

A slew of global equity markets are testing key bull market Up trendlines. After a few slow weeks, our #TrendlineWednesday feature on Twitter today was…