The following is a free look at the type of research posts regularly produced for members of The Lyons Share, in addition to the other Premium content.

We’ve posted several pieces in the past regarding what we’ve termed “Junkie Markets” — junctures characterized by a substantial number of both New 52-Week Highs and New 52-Week Lows. Such conditions represent a key component of various and notorious market warning signals, such as the Hindenburg Omen and others. As the ominous sounding names would imply, the historical stock market performance following such signals has been poor. We have found the same to be true with respect to our “Junkie Markets”. Today’s Chart Of The Day deals with a new variation of the Junkie Market.

Specifically, we have seen an unusual development over the past 2 days. On Wednesday, the number of net New Lows on the NYSE, i.e., New Lows minus New Highs, exceeded 2% of all exchange issues, a fairly large amount. The very next day, yesterday, conditions completely reversed as we saw net New NYSE Highs, i.e. New Highs minus New Lows, actually account for more than 2% of all issues. If you think that sounds strange, you’re correct. It is just the 15th such occurrence since the start of our data in 1970. 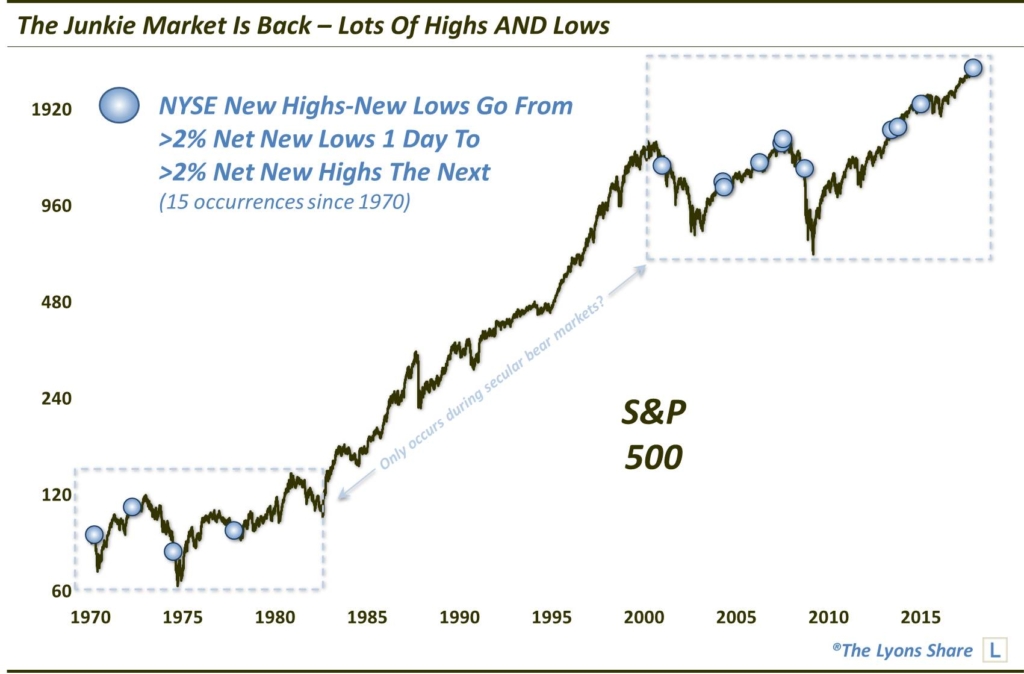 Here are the dates of these reversals:

What would cause such a phenomenon? Well, the only thing we can offer is that a Junkie Market, i.e., one with lots of New Highs and Lows, is really the only type of market in which such a reversal is even possible. Thus, it should not be surprising that the S&P 500’s aggregate performance going forward following these precedents has been less than stellar (incidentally, aggregate performance is similar following the 19 occasions of the opposite reversals, i.e., >2% Net New Highs to >2% Net New Lows).

With median returns negative from 1 week to 6 months, this appears to be another version of the Junkie Market that, for whatever reason, has not been kind to stocks going forward. Obviously, the presence of signals near cyclical peaks in the early 1970’s as well as 2001 and 2007-2008 do not help the aggregate returns (average returns are even worse than median).

Now, not all signals have occurred at the beginning of cyclical bear markets. However, as the chart shows, one interesting observation is that all of the occurrences have occurred during secular bear markets (that is, of course, if one accepts that we are still within the confines of the post-2000 secular bear market, as is our view — that is a topic for another time, though). The point is that, if true, the ramifications may reinforce the negative tendencies associated with Junkie Markets.

The bottom line for now is that, while it is certainly possible that stocks can continue higher in the interim, this condition of elevated New Highs and New Lows is a potential unhealthy headwind in the longer-term.

If you’re interested in the “all-access” version of our charts and research, please check out The Lyons Share. Find out what we’re investing in, when we’re getting in – and when we’re getting out. Considering that we may well be entering an investment environment tailor made for our active, risk-managed approach, there has never been a better time to reap the benefits of this service. Thanks for reading!