The following post was originally issued to The Lyons Share members on August 22; the key test alluded to below is currently underway.

A popular emerging markets ETF is testing a potential key line of support.

Perhaps it’s because of the circles we frequent on financial social media, but it seems like there’s been a great deal of debate recently about the prospects for emerging markets (EM). Whether it’s a proposed turnaround in EM’s relative performance versus the developed world, or key chart levels being reached in EM indices and securities, we have seen a bunch of calls arguing for a pending resurgence in emerging markets. We can’t say whether these folks are right or not, but we did highlight a piece of evidence from that latter category above which may bolster the bull case.

Every week (usually, but not always, on Wednesday’s), we run a feature on Twitter called #TrendlineWednesday, highlighting some of the most important trendlines across the financial markets. Today’s edition included our Chart Of The Day, showing the iShares MSCI Emerging Markets ETF (ticker, EEM) hitting a potential key line of support.

As the chart indicates, the EEM is testing the top of the broken post-2007 Down trendline. That trendline stems from the 2007 all-time high and connects the peaks in 2011, 2014 and briefly 2017. Presently, the trendline is approaching the $41 level. A few days ago, the EEM did kiss the line, putting in a low of 41.13, before bouncing higher for a few days.

So is the EM bottom in? — and the long-awaited EM resurgence at hand? Not so fast. It is a nice technical level — and importantly, price has now respected the line. However, as long-time followers and TLS members know, we typically prefer to rely on index charts as opposed to ETF charts to guide our trading. The reason being, indices are not subject to the multitude of potential distorting factors that can plague ETF charts, like distributions, illiquidity, rogue quotes, etc.

In the case of the EEM, we prefer to analyze the MSCI Emerging Markets Index (EMI) to guide our trading in EEM. And in the case of the EMI, there is a similar post-2007 broken Down trendline — and it has yet to be tested. 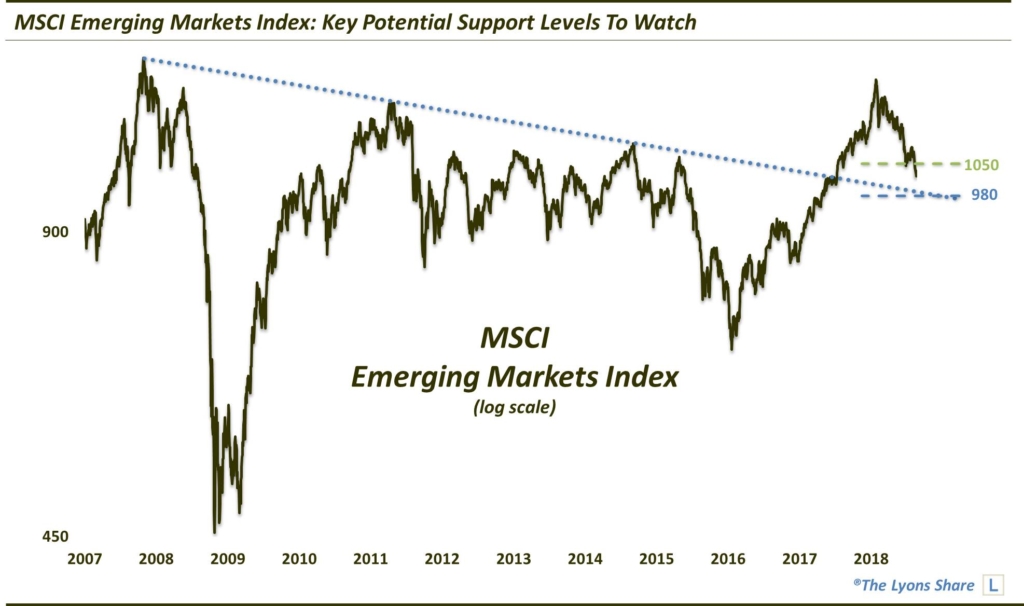 As the chart shows, the post-2007 Down trendline is currently intersecting near the 980 level. If we are going to take a stab at buying EM exposure at a trendline/technical test, it would be on this index as we find it much more reliable. And we do expect the trendline to be tested as it proved to be very important for 10 years on the way down.

The other possibility for a long entry point is on a rally back above key Fibonacci support shown on the EMI chart near 1050. As we’ve noted in many Daily Strategy Session videos, we considered 1050 to be important Fibonacci support stemming from the 2016 low and the 2017 breakout. The index first tested the level in June and it held. On the re-test this past week, the 1050 was decisively broken. If this recent decline is merely an overshoot of the 1050 re-test, it’s possible that the level gets reclaimed. If it does move back above there, we would not be averse to adding some EM exposure there — using a decisive close back below 1050 as a stop.

Failing to overcome the 1050 level, though, we would be on watch for an eventual test of the broken trendline and take our stab at the long side there. Stay tuned to our Daily Strategy Sessions for further updates and developments in this market.

END_OF_DOCUMENT_TOKEN_TO_BE_REPLACED

Here are some of the most noteworthy trendline developments across the markets for Wednesday, October 23, 2019.   U.S. Dollar Index $DXY Breaking Post-2018 Up…

END_OF_DOCUMENT_TOKEN_TO_BE_REPLACED

The numerous important trendline tests currently underway across the financial markets suggest this is a key juncture. Volatility in global equity markets has kicked back…