The following is an excerpt from our JLFMI 1Q 2019 Quarterly Client Letter.

In every market cycle, bull or bear, prices eventually reach a point at which the vast majority of investors become convinced that the trend at hand will continue on indefinitely. As much as price behavior, it is that sentiment condition that makes the market ripe for a cycle change. And the longer the cycle, the more extreme investor sentiment can stretch in that direction. Not surprisingly, the ongoing, near decade-long bull market has produced one of the more lopsided investor sentiment extremes on record.

There is, most importantly, plenty of measurable evidence of this bullish sentiment extreme and we will present a few examples of such. However, even anecdotally, bullish sentiment has seemingly reached extremes rarely before attained. Now, whether it’s actually true or merely apparently true, we attribute that notion largely to a medium that did not even exist in prior cycles: social media.

Social media outlets like Twitter and others allow information, good and bad, to be disseminated much more quickly and broadly than ever before. All it takes is an internet connection. Individual traders around the globe now have access to fundamental data and news headlines in just as timely a manner as professionals (though, good luck trying to beat the resulting computer algo-driven reactions). Additionally, traders have no shortage of access to all forms of technical analysis from those willing to share. And that includes some pretty high-level content from experienced and skilled pros — though, much is still behind a paywall.

In aggregate, this global connected community of market participants and content forms what is probably the broadest, most comprehensive gauge of investor sentiment in history. It may even be more comprehensive than the stock market itself as there are no entry fees or shares that one must buy in order to profess a market view on social media. Thus, an accurate assessment of the aggregate sentiment on social media can be a really useful, or at least instructive, tool for investors.

So what is the prevailing assessment of this massive market sentiment indicator? Well (at least prior to this past quarter), we’d have to say it’s somewhere between extreme bullish complacency and extreme bullish condescension. Though, that’s probably understandable given 10 years of a bull market. Not to mention, a large swathe of the millennial participants active on financial social media have never experienced a bear market. Financial social media itself has never really experienced a bear market. Therefore, given the democratic and anonymous nature of the social media bullhorn, it’s not surprising that the loudest and most cocksure collective sentiment view on the medium is overwhelmingly bullish.

Of course there are bearish voices on the medium as well – and “loud” ones at that as they have the same bullhorn as everyone else. However, the number among their ranks pales in comparison to those in the bullish camp. That too is not surprising given the longevity of the bull market and the aversion to maintaining a publicly incorrect view on social media. Only those with the occasional tactical or surgical bearish “strikes” have been able to navigate the bullish social media gauntlet these past many years. The other poor, unfortunate souls are the perma-bears. Their role in the inaugural decade of financial social media has been rough.

The proliferation of financial social media really took place on the heels of the financial crisis. Given the tumultuous event and the wretched sentiment it produced, it is wholly understandable that the experience would stick in the minds, and likely portfolio decisions, of market participants for some time. It was a financially traumatic event and to expect a relatively smooth 10-year economic and market run to immediately follow was pie in the sky for even the most ardent of bulls. It was far more natural and common for years to come to keep one eye focused on the next shoe to drop. We were certainly guilty of that at times over the past decade.

Yes, there have been rough patches in the market along the way, e.g., Flash Crash, 2011, 2015-2016. But none of them materialized into the next catastrophic market “shoe” that perma-bears have been expecting. And each episode that failed to result in disaster has led to more egg on the face and more social media shaming of the bears. We use the word “shaming” because much of the discourse on social media — probably due mostly to the absence of any barriers to entry — is not what we would consider civil. And while that is an unfortunate (but not unexpected) byproduct of the medium, the emotional aspect can also be a useful sentimental measuring stick.

Sure, it is optimal if you can go all big-data and quantify the aggregate sentiment emanating from social media. However, if you are an active enough participant or even observer, it is possible to detect a change in sentiment on the medium, not only from bullish to bearish, but also, for example, from bullish to uber-condescending bullish. Any longer-term bearish views that get expressed on social media are typically met with a proverbial eye-roll emoji or “lol”. And while extremes can always get more extreme (and more obnoxious in this case), it is our view that sentiment over the past 12 months has reached that condescending, bear-shaming bullishness that may very well (finally) be too extreme for the perpetuation of this bull market.

No, I am not trying to say that the bears have been right and the bulls have been wrong these past 10 years. Stock prices are the scoreboard and this decade-long contest has been about as lopsided as it could conceivably be. Nor am I trying to rationalize a market participant being wrong for 10 years. However, we do understand the bears’ case. Further, we agree with the longer-term bearish case and, again, will lay out just a few pieces of evidence in favor of that view. I assure you it is no laughing matter for investors.

In our view, the next catastrophic shoe to drop is just a matter of timing — always the most important ingredient in investing. And a necessary ingredient in establishing conditions for a potential major market turning point is always a sentiment extreme. However, while the bulls have ruled Wall Street for the past 10 years, much of the run has been in the face of, or fueled by, skepticism toward stocks. In recent years, that has changed as we have witnessed various measurable sentiment indicators reaching bullish levels that have marked significant market tops in the past. However, still THE top has remained elusive.

With this new tool, social media, we can take the task of assessing the tone of investor sentiment to another level. No, social media-based sentiment observations are not always quantifiable like we’d prefer. However, there is a palpable, detectable sentiment tenor among financial social media if one hangs around there enough. And the recent heights (or, more appropriately, depths) of bullishness whereby any bearish view is met with dismissiveness and derision would seem more than sufficient in satisfying the “extreme sentiment” condition necessary for a turn.

Eventually – perhaps soon – it will be the bears who will have the last laugh.

We have mentioned many times in the past how long-term cycles in the stock market work. During a long-term (secular) bull market, market conditions are built up to an eventual excess that the market can no longer sustain. At that point (e.g., 2000), stocks succumb to a secular bear market during which such excesses are “wrung out”. Historically, it has always been the case that market conditions that went to excess on the upside eventually fall to comparably low levels on the downside. That did not quite happen, we would argue, during the financial crisis.

Now, we aren’t ones to espouse conspiracy theories about market manipulation and the such. We believe some entities, like the stock market, are too vast to be sustainably manipulated. However, I don’t think it’s a stretch to suggest that the massive central bank intervention that has taken place over the past decade has at least mitigated some of the necessary repair work. Thus, at this point, the market is laden with excesses that weren’t adequately worked off from the bull market that ended in 2000 – and new excesses associated with the past 10 years of a bull market. That is a cocktail for a pretty painful reckoning for investors – of which this past 4th quarter was potentially merely the tip of the iceberg.

Whether you buy into this theory, the fact remains that there is currently considerable excess built into the stock market, ranging from the level of public investment to equity valuations to the level of prices themselves. And while these conditions can persist for some time (and have), they are already well beyond historical warning levels. Here are just a few examples.

The following chart displays the level of household stock investment as a percentage of their financial assets. As it indicates, households are far above all previous levels of household equity investment outside of the 2000 top — the most excessive, bubbliest market top in U.S. history, by the way. 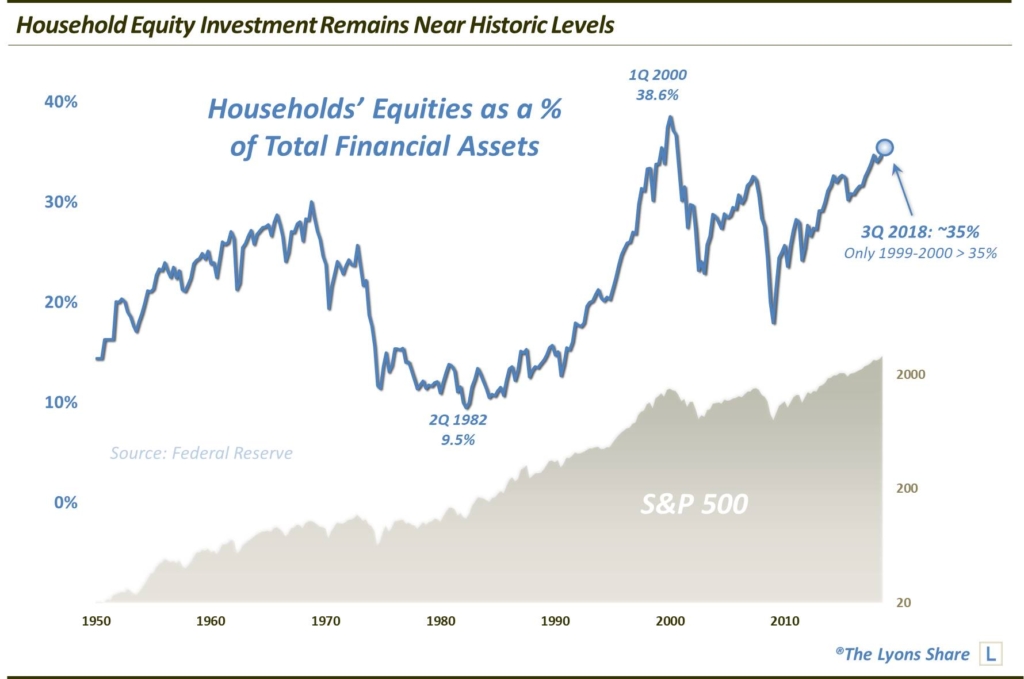 Also of note, stock valuations are at historically high, and unsustainable, levels. For example, the Cyclically Adjusted Price to Earnings Ratio, or CAPE, recently surpassed 1929 levels and now also trails only the 2000 top in excessive valuation. 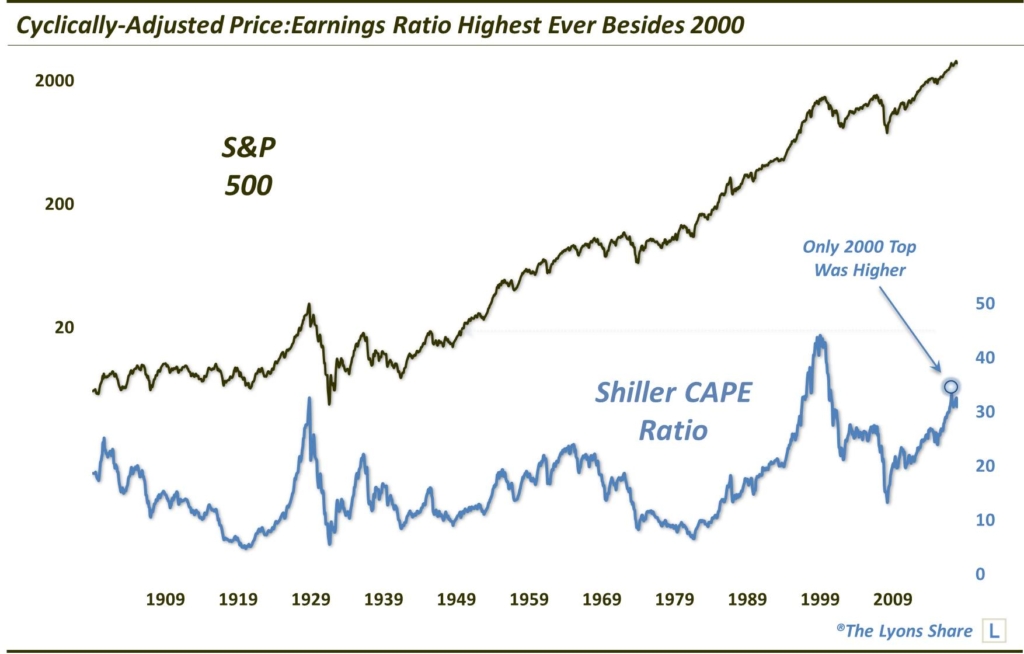 Finally, even stock prices themselves can be considered excessive. In fact, when compared to a regression trend line on the S&P Composite going back to inception in 1871, the index price reached 122% above its long-term trend this past September. Another way of saying that is that the S&P 500 is 122% overbought. In other words, if stock prices were simply to revert to their long-term mean, the S&P 500 would be down closer to 1300 than recent highs near 2900. 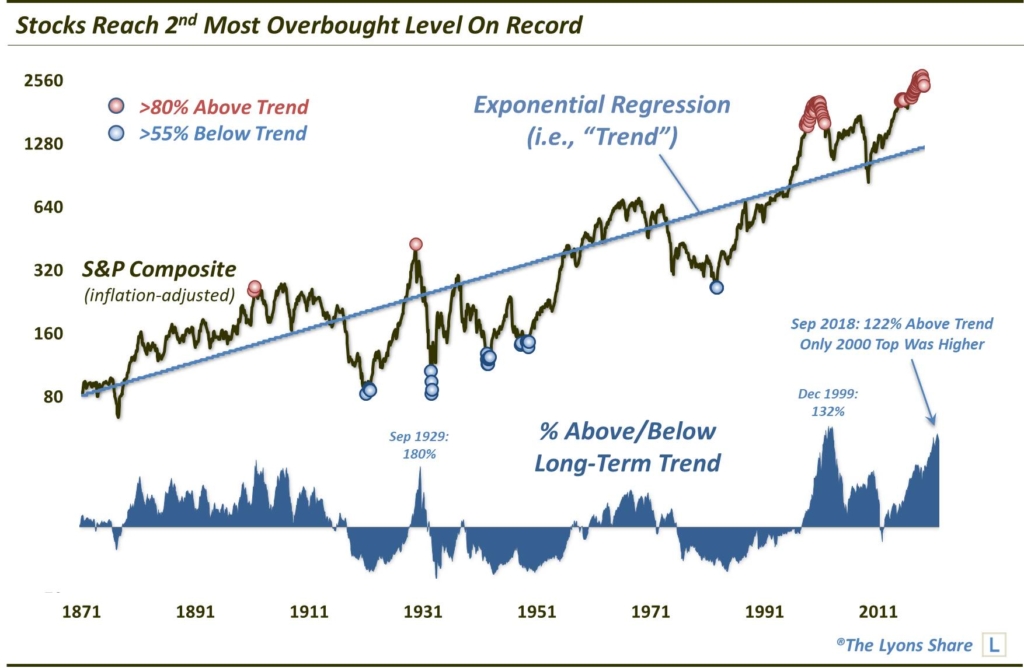 There are certainly plenty more examples of excess in the stock market. But these few should give you an idea why, if we have entered a longer-term bear market, the oft-derided bears may end up getting the last laugh.

If you are interested in an “all-access” pass to our research and investment moves, we invite you to further check out The Lyons Share. Given an treacherous emerging market climate, there has never been a better time to reap the benefits of our risk-managed approach. Thanks for reading!