According to one survey, individual investors poured money back into stocks at a historic pace last month.

There is quite a bit of debate stirring regarding the extent to which investors are embracing the current stock market bounce. On one hand, some sources indicate a good deal of flows out of stocks since the late December (“once-a-decade“) low. On the other hand, we have conflicting evidence indicating that individual investors have actually been piling back into stocks — at a historic pace.

The latter data comes from the American Association of Individual Investors — or, AAII — Asset Allocation Survey. According to the survey, investors reallocated 8.8% of their portfolios into stocks in January, the largest shift into stocks in nearly a decade (December 2009), and the 7th largest influx in the survey’s 32-year history. On the flip side, investors also pulled 8.5% out of cash in their portfolios in January. That equates to the 5th largest drop in cash in the survey’s history, and the largest in almost 10 years (also December 2009).

In terms of levels, stock allocation is now indicated at 71.2%. Outside of December 2017 (72.0%), you have to go back to July 2000 to find a higher stock allocation. In fact, until this past year, just one month since 2001 has recorded stock allocation over 70% (April 2006). At 13.3%, meanwhile, the cash allocation is the 5th lowest ever recorded. And outside of the past year, the only other months that registered so little cash were March 1998 and December 1999.

In other words, the combination of elevated stock allocation and low cash allocation has only been seen a handful of times — 3 months over the past year and approaching the tops in 1998 and 2000. 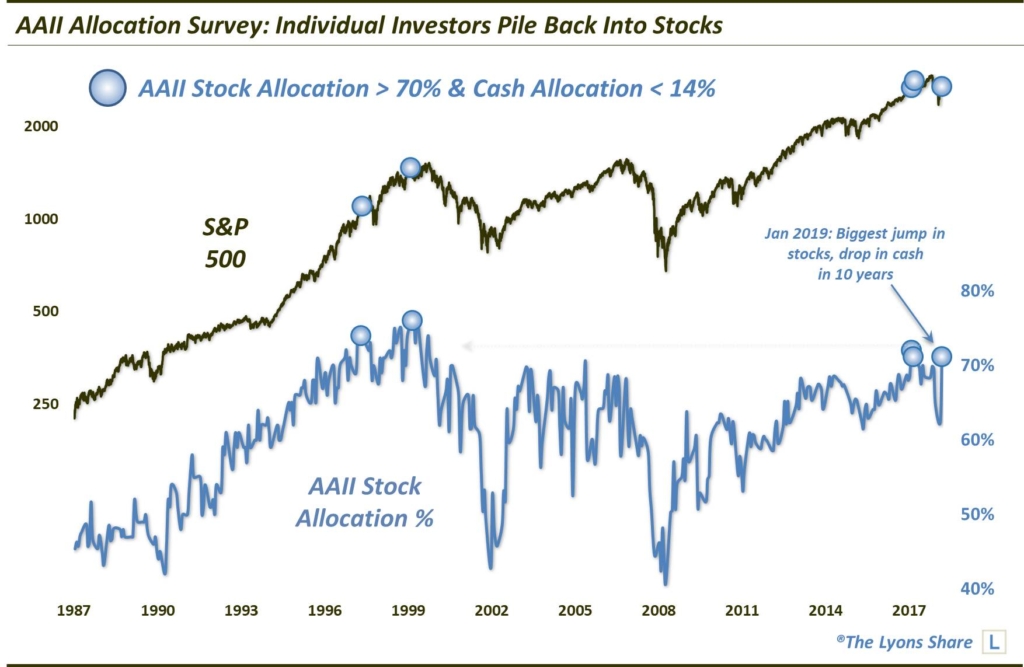 So what is this survey telling us? At face value, it is a warning sign, from a contrarian perspective, that investors have warmed back up to stocks again too quickly and too aggressively. It doesn’t mean the rally can’t continue further necessarily. However, it probably means that the bulk of investor money has been deployed and to chase stock prices at these levels means one is probably late to the party.

Now, we do say “at face value” because it may be prudent to take the data with at least a small grain of salt .First off, it does conflict with some of the other investor allocation data we’ve seen. Furthermore, based on the survey’s history, the extent of the u-turn back into stocks following the 4th quarter selloff seems rather extreme — and a little surprising. We aren’t questioning the veracity of the data. However, we have seen the data adjusted retroactively in the past on rare occasion.

Assuming the survey response is accurate, however, we will refer folks to the myriad of warnings regarding investing with the herd.

How are we investing in response to this data? We invite you to check out The Lyons Share, a daily “all-access” pass to our research and investment moves. Given what may be a treacherous emerging market climate, there has never been a better time to reap the benefits of our risk-managed approach. Thanks for reading!