After year-long consolidation, UK’s FTSE-100 may be ready to embark on its next major up-leg.

In our final post of 2016, we highlighted a potentially significant development emerging in the UK’s benchmark FTSE-100 Stock Index. The post had much to do with the fact that the Brexit-as-Armageddon crowd totally whiffed on the FTSE’s move to all-time highs by the end of the year. Even more significant, however, was the fact that the FTSE was potentially executing a successful breakout above a massive 16-year triple top.

The FTSE would indeed follow through on its breakout in the first few days of the new year. By late January, though, the index was back down testing the massive breakout level, around 7100. As we posted at the time (Another Chance To Hop Aboard The FTSE Bus?), we seized on this potential substantial opportunity:

“…the significance of this breakout cannot be overstated. There is no guarantee that the breakout will be successful, of course. But after waiting 17 years, 2 cyclical tops and a serious intermediate-term top, the breakout of a month ago is a chart watcher’s dream. And the good news is, if you missed the breakout the first time, you’re getting another shot at it now. That’s because after about a 3.5% pop following the breakout, the FTSE-100 has now pulled back and is approaching a test of that breakout level.

Again, there is no guarantee in this business. All one can do is try to garner the best odds of success in a trade. In this case, testing 17 years of former resistance turned possible support represents about as high odds as one can hope to find. So needless to say there is compelling evidence to hop aboard the FTSE bus here.”

The test proved successful as the FTSE rebounded immediately off of the breakout level. The bounce, however, would take the index only slightly above its January highs over the next 6 weeks before it reversed back down again. And once again, in late April, the FTSE was back down testing the 7100 breakout level (Investors Get Another Chance To Hop On The FTSE Bus). Again, the test held and it was obvious that the index was mired in a trading range, the resolution of which would likely determine the success (our guess) or failure of the year-end breakout. We just had to wait for the resolution.

Well, nearly a full year later, the trading range may be seeing resolution. We say that as the FTSE is trying to break out above the top the 12-month range near 7600. 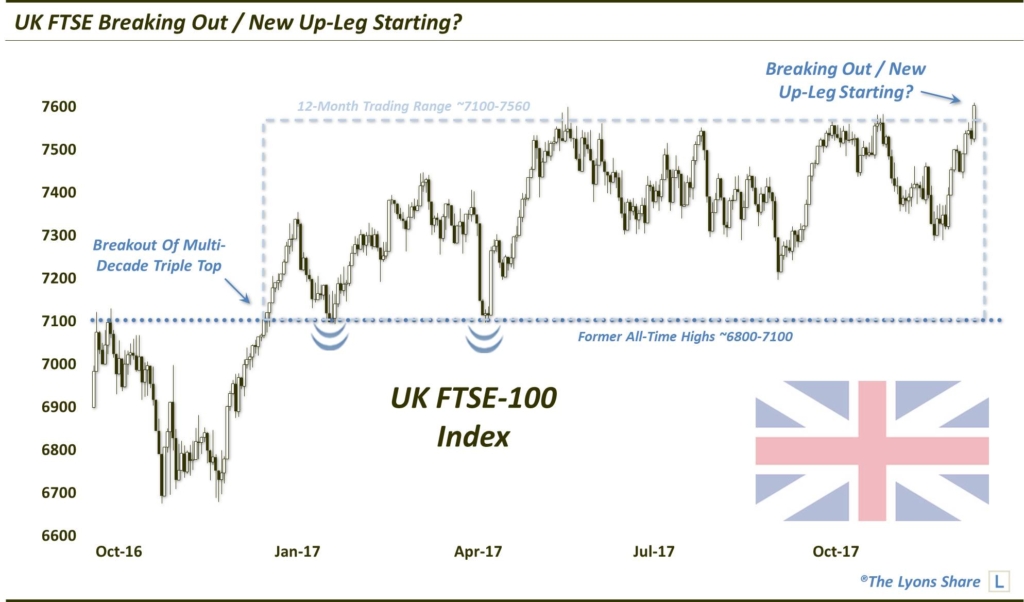 Here is the big picture showing the triple top going back to 2000. 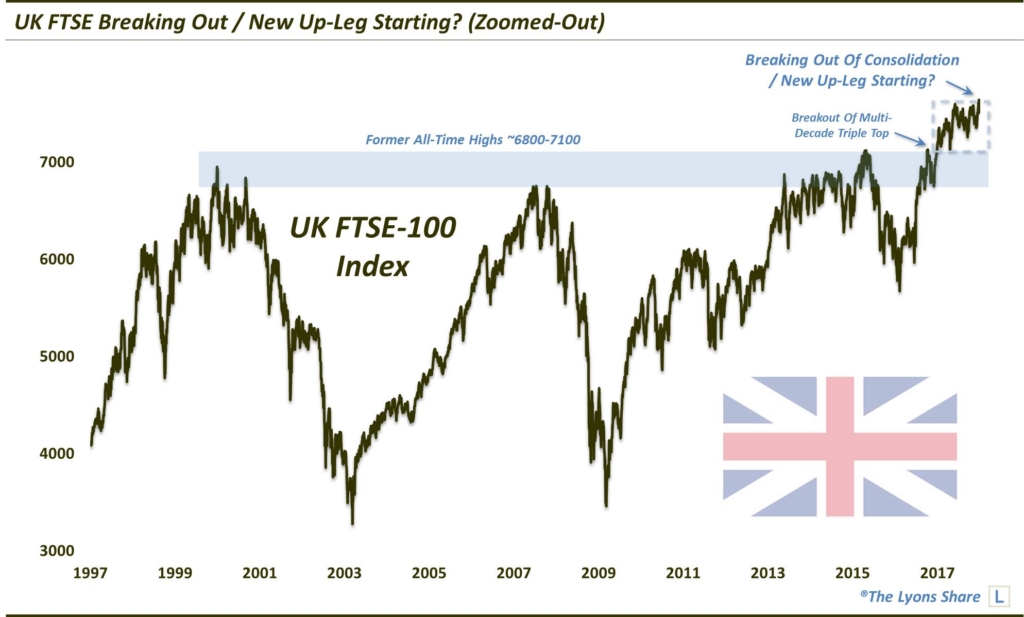 Will this breakout prove successful? We still don’t have a crystal ball. We will say that we still like the FTSE’s chances of moving higher over the long-term. This year-long consolidation was not at all unhealthy following the breakout above a triple top spanning multiple decades. Presumably, the FTSE is now refreshed and refueled for another durable drive higher, should it decide to do so. This also makes the market an attractive option relative to, say, U.S. large-caps that have seemingly gone straight up unabated this year.

As we said, the significance of a 16-year breakout should not be understated. The upside could be substantial, and the risk/reward ratio could hardly be more favorable. At this point, one merely has to manage the success/failure of the breakout line in question, around 7550. If the index remains above it, the substantial upside remains a possibility. If it moves back below, then it’s perhaps a head-fake and one can stop themselves out to avoid being pantless when the tide goes out.

So, if you have not gotten aboard the FTSE bus, you might consider doing so.

If you’re interested in the “all-access” version of our charts and research, please check out our new site, The Lyons Share. Considering what we believe will be a very difficult investment climate for perhaps years to come, there has never been a better time to reap the benefits of our risk-managed approach. Thanks for reading!