The following post was originally issued to TLS members on January 14, 2020.

What does the current level of investor sentiment mean for our investment positioning?

If you’ve been following us for any length of time, you know that our investment approach rests on quantitative risk Models and objective, measurable data derived directly from the market. Everything else is noise. The past several months has been a great example of why we advocate such an approach. Whether it’s the U.S.-Iran skirmish, the U.S.-China trade war, impeachment, drone attacks, etc., etc., there has been no shortage of “reasons” why the stock market should have been subject to serious losses. And yet, the market has continued along its steep upward trajectory, unabated and undeterred by such “noise”. Why? Because the measurable, objective market data that matters in determining risk, and thus, the probable path of the market, has steadfastly indicated the most likely path for the market is higher.

With that being said, there are ancillary factors which, while perhaps not directly altering the direction of stocks, can set the conditions for a potential shift in the market’s trend. One such factor is investor sentiment. Sentiment measures the degree of bullishness or bearishness among a set of investors. Now, sentiment measures are generally less than helpful the majority of the time. However, when they reach an extreme level, they can be very useful.

Most such sentiment measures are contrary in nature, i.e., when sentiment hits extreme bullishness, stocks tend to revert back down and when sentiment hits extreme bearishness, stocks tend to rebound. For this reason, it is said that stocks like to climb a “wall of worry”. In other words, when there is plenty of disbelief or skepticism, stocks tend to perform well. The reason being that there is an ample supply of new marginal buyers waiting to potentially enter the market. That condition was certainly a contributing factor in the market’s buoyant 4th quarter. That wall of worry, however, is gone. Investor sentiment can now safely be categorized somewhere between complacency and frothy.

This includes both near-term and longer-term sentiment measures. In the shorter-term, the CBOE Equity Put/Call Ratio is hitting one of its lowest readings in our database going back to 2003. That indicates that money is going into calls (bets on a rising market) relative to puts (bets on a declining market) at one of the fastest clips ever. Using a 21-day average, the ratio is at its lowest level in about 6 years. 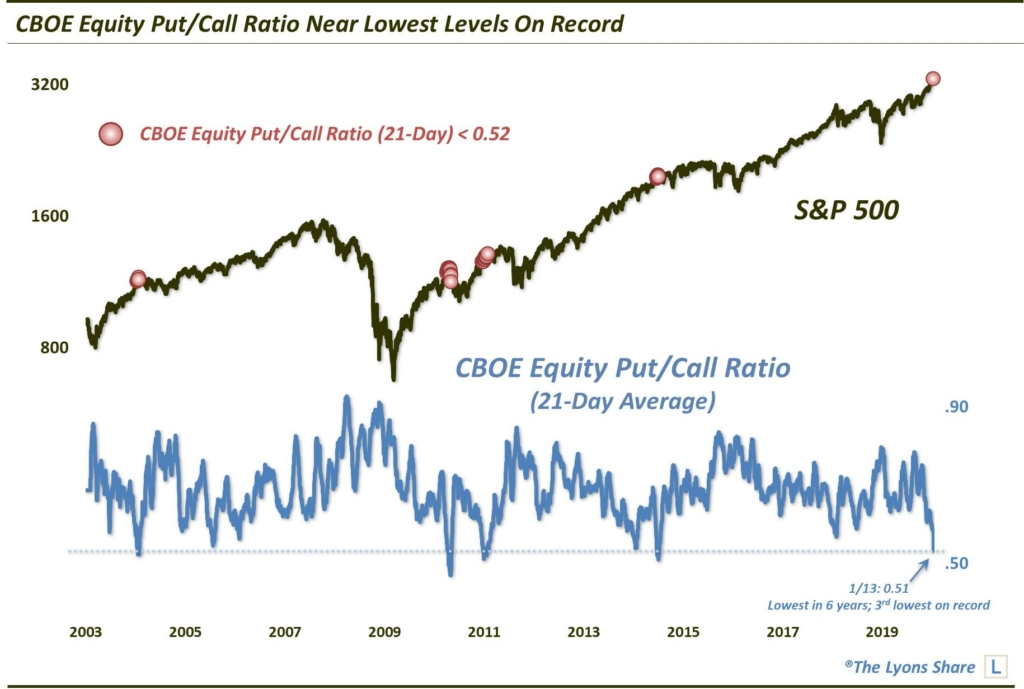 From a longer-term perspective, some sentiment readings are just as frothy. Perhaps the most important gauge that we use comes from our colleague Jason Goepfert at Sentimentrader.com. He calculates a collection of both typically contrary indicators (Dumb Money) and typically non-contrary indicators (Smart Money). When the spread between bullishness among the Smart Money and the Dumb Money becomes extremely tilted toward the latter, it can be a warning sign. That is the case right now. 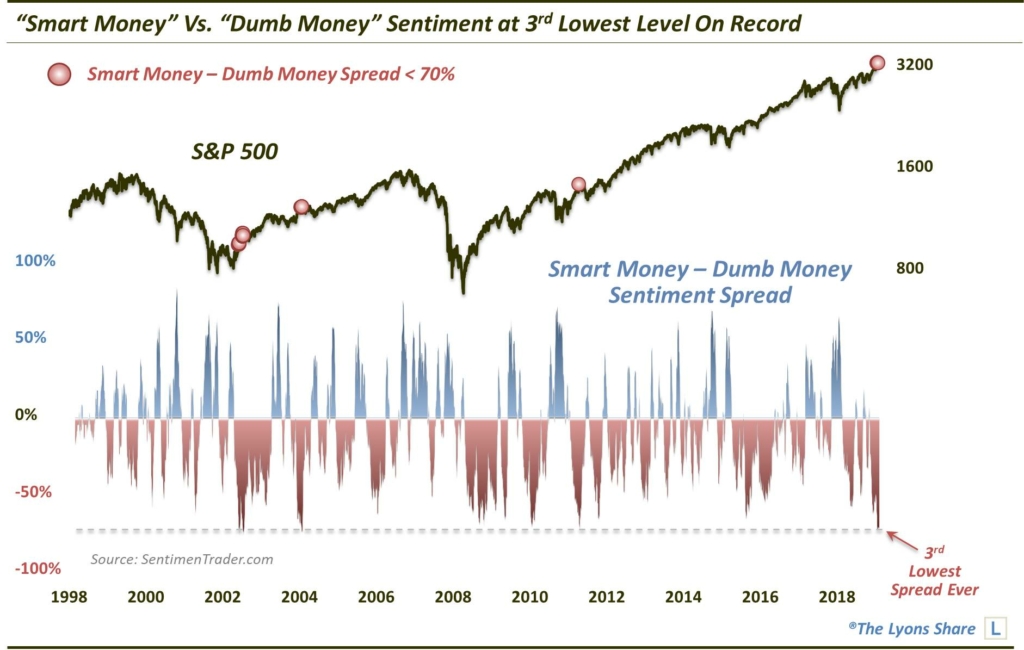 As the chart shows, Dumb Money sentiment outpaces Smart Money sentiment to a degree that has only been eclipsed 2 other times since the inception of this version of the data going back to 1998. Why is this important? For one, the number of sentiment measures included in this data make it a more robust indicator. It isn’t just a single sentiment series.

Secondly, this indicator is actually incorporated into our Risk Model, in combination with a certain breadth calculation. The inclusion of this indicator, which took the place of another smart/dumb money measure, came about only as a result of an exhaustive study of the data going back many decades. Thus, we are confident of the implications of this sentiment measure given our knowledge of its track record — especially in conjunction with other Model components. At these levels, the indicator is becoming a concern.

Again, sentiment does not necessarily produce actionable signals for us. However, the rampant bullishness does represent a condition in which the stock market is especially susceptible to a reversal lower and material selling pressure. Therefore, it is contributing to a slight shift in our current investment approach. How so?

We are watching the S&P 500 particularly closely as it approaches its 161.8% Fibonacci Extension of its 4th quarter 2018 decline. That Extension lies just above the 3300 level. You can expect a shift in our Short-Term Outlook to Bearish should that occur (or potentially sooner). The Short-Term Outlook has been Neutral since a Bullish signal on December 3, 200 S&P 500 points lower.

As always, stay tuned to the Daily Strategy Sessions every AM as we cover our “watch lists” and all of our potential moves on a daily basis.